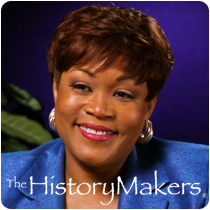 See how Barbara Ciara is related to other HistoryMakers
Donate Now

Television news anchor Barbara Ciara was born in Pittsburgh Pennsylvania on July 27, 1956 to Robert and Georgia Jones. Ciara received her G.E.D. at the age of 16 before moving on to Pima Community College and the University of Arizona in Tucson in 1974. Ciara left school to take a full-time position at Tucson television station KZAZ-TV in 1976. Two years later, Ciara was promoted to news director at KZAZ-TV, becoming the youngest and first African American female to attain a management position at a television station in the southwest region of the United States.

After working for KZAZ-TV, Ciara landed a co-anchor position with Norfolk, Virginia area television station and NBC affiliate WAVY-TV in 1983. She then served as a news co-anchor with Hampton Roads area television station and ABC affiliate WVEC-TV. After 12 years at WVEC, Ciara landed an anchor role with CBS affiliate WTKR-TV in 2000, anchoring three news telecasts. That same year, she completed her undergraduate education at Hampton University, graduating Summa Cum Laude. In addition to being a notable presence in the Hampton Roads community, Ciara gained a national profile in 2007 when she was elected president of the National Association for Black Journalists, the largest organization for journalists of color in the world. In the following year, Ciara assumed the role of president for UNITY: Journalist of Color, a coalition of four organizations representing Native American, Hispanic, Asian American and black journalists across the country.

Ciara is the recipient of numerous journalism awards, including an Emmy Award and a regional Edward R. Murrow Award for her broadcast journalism. She has also won an Associated Press award for her journalism and has been inducted into the Silver Circle of the National Capital Chesapeake Bay Chapter of the National Academy of Television Arts and Sciences. Ciara was featured in Ebony magazine. Her stateside coverage includes political campaigns, investigative reporting and interviews with luminaries like Presidents Bill Clinton, George W. Bush, Barack Obama and Oprah Winfrey.

She has provided analysis on CNN, CBS News, XM Radio, National Public Radio and the Tom Joyner Morning Show in addition to providing quotes for the New York Times and the Washington Post, among other news outlets. Ciara is married to her husband, Arthur Jarrett, Jr.

Barbara Ciara was interviewed by The HistoryMakers on February 7, 2012.

See how Barbara Ciara is related to other HistoryMakers
Donate Now
Click Here To Explore The Archive Today!