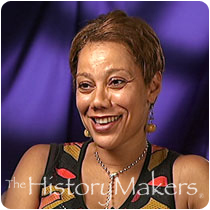 Self-taught fashion designer Barbara Bates was born on June 27, 1955, in Chicago, Illinois. Her father, Elvin Hicks, was a school teacher and her mother, Vera, was a housewife. Bates went through Chicago's public school system and graduated from Marshall High School in 1962.

Bates worked a variety of jobs after graduating from high school, where she frequently designed the clothes she wore. In 1984, while working as a secretary for the First National Bank of Chicago, Bates began selling her clothing out of the bathroom during lunchtime. This experience led Bates to design clothes full-time and, two years later, she opened a 700 square-foot showroom, which is located in Chicago's South Loop.

In 1999, Bates founded the Bates Foundation to provide custom-made prom dresses to underprivileged or hard-to-fit young women from inner-city schools in Chicago. Bates' desire to make dresses for these women comes primarily from her own trials as a teen mother. Bates remembers the alternative school she attended as a pregnant fifteen-year-old and promised to make prom dresses for the girls that returned to high school and graduated. Bates has two sons, Eugene and Kristopher.

Bates Designs continues to be a leader in the world of fashion. Exotic fabrics and the use of leather trim are among the hallmarks of her designs. Bates has outfitted numerous celebrities including: Sinbad, Michael Jordan, Whitney Houston and Mike Tyson.