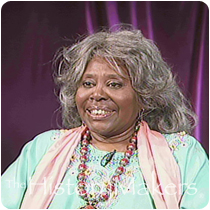 See how Barbara Ann Teer is related to other HistoryMakers

In the 1960s, Teer left show business to begin teaching at Harlem's Wadleigh Junior High School; her methods helped to develop the Group Theatre Workshop, which became the foundation for the world renowned Negro Ensemble Company. In 1968, Teer founded the National Black Theatre with the aim of maintaining and developing African American cultural traditions. In 1983, Teer expanded the purpose and vision of the National Black Theatre by purchasing a 64,000 square foot city block of property on 125th Street and Fifth Avenue, creating the first revenue generating black art complex in the country by housing several entrepreneurial businesses.

In May 1994, Teer was awarded an honorary doctorate degree from the University of Rochester, New York; in 1995, she received an honorary doctorate degree of humane letters from the University of Southern Illinois. Teer is included in Who's Who Worldwide, which recognizes her as a global business leader and has received more than sixty awards and citations. Teer passed away on July 21, 2008 at the age of 71. She leaves behind two children: her son, Michael F. Lythcott, is a graduate of the University of Pennsylvania and Columbia University's Business School and her daughter, Barbara A. Lythcott, is a graduate of New York University.

See how Barbara Ann Teer is related to other HistoryMakers
Click Here To Explore The Archive Today!