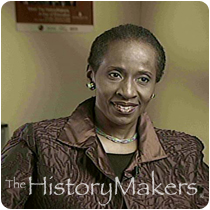 See how Barbara Ann Lumpkin is related to other HistoryMakers

Banker and former public official Barbara Ann Lumpkin was born Barbara Ann Madlock on July 27, 1950 in Oxford, Mississippi to Estella and John Lewis Madlock. She attended Green Hill Elementary School and graduated from North Panola High School in 1968, where she excelled in theater. Lumpkin earned her A.A. degree from Coahoma Community College in 1970, and after moving to Chicago, she took additional business administration courses at DePaul University.

Lumpkin began her career in banking as an assistant recruiter in the human relations department of Chicago’s Continental Bank. Gaining a front line banking job in 1980, she served in the bank’s Personal Financial Services Group. In 1985, Lumpkin moved to the Corporate Trust Department, where she rose to the position of senior vice president and corporate trust manager. After joining Amalgamated Bank in 1994, Lumpkin was certified as a corporate trust specialist by the Canon Financial Institute. In 1995, Lumpkin became Chicago’s City Comptroller and, in 1998, the City’s Budget Director. In 1999, an investigation forced the City Treasurer out of office, and Chicago Mayor Richard M. Daley appointed Lumpkin to the position of City Treasurer. She was later appointed a special assistant to Mayor Daley. In 2000, Lumpkin left this position to become senior vice president in the Corporate and Institutional Services business unit of Northern Trust Bank.

In 2005, Lumpkin was called to serve the City of Chicago as the City of Chicago’s Chief Procurement Officer when it was revealed in early 2005 that Chicago was underperforming in its employment of minority contractors. Lumpkin was responsible for implementing promised improvements. In addition, she leads the City’s Minority, Women and Disadvantaged Enterprise Initiative. She is also an advisory board member of the United Negro College Fund and has publicly endorsed career opportunities in the financial and banking worlds for rising students. Lumpkin is a member of the Chicago Finance Exchange and the Urban Bankers Forum.

Lumpkin was interviewed by The HistoryMakers on August 18, 2006.

See how Barbara Ann Lumpkin is related to other HistoryMakers
Click Here To Explore The Archive Today!