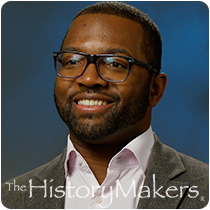 See how Baratunde Thurston is related to other HistoryMakers
Donate Now

Comedian and writer Baratunde Rafiq Thurston was born on September 11, 1977 in Washington, D.C. Thurston graduated from the prestigious Sidwell Friends School in 1995, and received his A.B. degree in philosophy from Harvard University in 1999.

From 1999 to 2003, Thurston worked as an associate for Cambridge Strategic Management Group and the Management Network Group. He then worked as a contract senior consultant for Altman Vilandrie & Company, and as a contract producer and advisor for Untravel Media. In 2006, Thurston co-founded the black political blog Jack & Jill Politics. From 2007 to 2012, he served as digital director for the satirical news outlet, The Onion. In the summer of 2012, Thurston co-founded the comedy/technology startup, Cultivated Wit, where he serves as CEO. He also writes the monthly back page column for Fast Company, and has contributed to the Huffington Post and the Weekly Dig. In addition, he is a semi-regular panelist on the podcast This Week in Tech, and hosted the Discovery Science show Popular Science's Future Of in 2009 and 2010. He performs standup comedy in New York City and across the United States, as well as delivers keynotes at South by Southwest, Personal Democracy Forum, and the Guardian Changing Media Summit. In May 2011, Thurston spoke at the presidential palace in Tbilisi, Georgia on the role of satire in a healthy democracy, and he has advised The White House on digital strategy and public engagement. In January of 2012, Thurston joined the MIT Media Lab as a director's fellow. He has been featured on CNN, NPR, BBC, and C-SPAN, as well as in the New York Times and Boston Globe.

Thurston has authored four books: Better than Crying: Poking Fun at Politics, the Press & Pop Culture (2004); Keep Jerry Falwell Away from My Oreo Cookies (2005); Thank You Congressional Pages (For Being So Damn Sexy!) (2006); and the New York Times best-seller, How To Be Black (2012).

The American Civil Liberties Union of Michigan honored Thurston “for changing the political and social landscape one laugh at a time.” He was also nominated for the Bill Hicks Award for Thought Provoking Comedy. The Root added him to its list of 100 most influential African Americans, and Fast Company listed him as one of the 100 Most Creative People In Business.

Baratunde Thurston was interviewed by The HistoryMakers on April 7, 2014.

See how Baratunde Thurston is related to other HistoryMakers
Donate Now
Click Here To Explore The Archive Today!