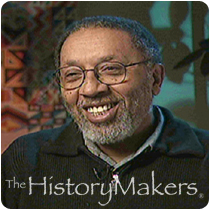 Alfred Bennett (A.B.) Spellman, Jr. was born on August 7, 1935 in Elizabeth City, North Carolina. Both his parents were educators. He earned his high school diploma from P.W. Moore High School, where he was a member of the basketball team, glee club and oratorical club.

In 1956, Spellman earned his B.S. degree in political science from Howard University. While at Howard, he was active in the chorus, the Howard Players, and he began his writing career. After graduating, Spellman enrolled in the Howard University Law School. In 1959, Spellman worked as a writer, reviewing jazz artists and music for various magazines such as Metronome and Downbeat. In 1964, he published his first and only book of poems entitled The Beautiful Days.

In 1966, Spellman’s writing career took off when he published his first full-length book, Four Lives in the Bee-Bop Business, an in-depth look at the lives of jazz musicians Cecil Taylor, Ornette Coleman, Herbie Nichols and Jackie McLean. The following year, Spellman joined a group of black poets touring the nation’s historically black colleges. From 1968 until 1969, he worked as a political essayist and poet for Rhythm Magazine, and in 1969, Spellman conducted a lecture series throughout the country teaching at various colleges including Morehouse, Emory and Rutgers. In 1972, Spellman was hired to teach African American studies at Harvard University, where he remained until 1975. That year, he became director of the Arts in Education Study Project for the National Endowment of the Arts (NEA) in Washington, D.C. In 1978, Spellman became the director of the NEA’s Arts Endowment Expansion Program, a position he held until 1993. Continuing his work with the NEA, Spellman next became the special assistant to the chairman and acting deputy chairman for programs. Between 1994 and 1996, he served as associate deputy for program coordination at the NEA, and then became the director of the NEA’s Office of Guidelines and Panel Operations. In 1998, Spellman was appointed the deputy chairman for the Office of Guidelines, Panel and Council Operations for the NEA.

Spellman continues to be an avid writer, and he serves on numerous arts panels and is a member of the Rockefeller Panel an arts, education and Americans, the Jazz Advisory Group and the Advisory Group on the African-American Museum of the Smithsonian Institute.