Information about B Michael 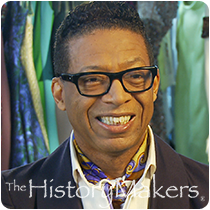 Favorite Color:
Navy Blue
Favorite Food:
Oxtail
Favorite Time of Year:
Summer
Favorite Vacation Spot:
Giverny, France
Favorite Quote:
God's Will For Me Is My Will For Me.

Favorite Color:
Navy Blue
Favorite Food:
Oxtail
Favorite Time of Year:
Summer
Favorite Vacation Spot:
Giverny, France
Favorite Quote:
God's Will For Me Is My Will For Me.

See how B Michael is related to other HistoryMakers

Fashion designer B Michael was born in 1957 and raised in Durham, Connecticut. His mother was a real estate agent and his father, a certified public accountant. B Michael found early design inspirations in his mother’s creativity and keen sense of style. He attended the University of Connecticut and also studied at the New York Fashion Institute of Technology.

B Michael was first hired as an account executive for a Wall Street firm, but decided to pursue a career as a millinery designer. He started designing hats under Oscar de la Renta, Louis Feraud, and Nolan Miller for the 1980s television soap opera Dynasty. Following his success on the show, B Michael became creative director for the Aldo Hat Corporation. In 1989, he decided to launch his namesake millinery line and in 1999 developed and launched his first couture collection with the help of PR Guru Eleanor Lambert.

B Michael’s collections have garnered appreciative fans including socialites and personalities such as Cicely Tyson, Ashley Bouder, Amy Fine Collins, Tamara Tunie, Beyoncé, Nancy Wilson, Susan Fales-Hill, President Barack Obama's poet laureate Elizabeth Alexander, and Lena Horne, among many others. He also designed Whitney Houston’s costumes for the motion picture, Sparkle. He has shown his b michael AMERICA Couture collection in Beijing, China, Korea and Shanghai, and his ready to wear fashion line b michael AMERICA RED sells in Macy’s department stores across the United States.

In 1998, B Michael was granted membership in the prestigious Council of Fashion Designers of America (CFDA). He has served as a guest lecturer at New York’s Fashion Institute of Technology. He also serves on the advisory boards of Dream Yard Project, YAGP (Youth America Grand Prix) and the Cicely Tyson School of Performing and Fine Arts. In addition to his work and community activism, B Michael is an avid collector of vintage books, artifacts and photography.

B Michael lives in New York City with his life partner Mark-Anthony Edwards and their two daughters, Saferra and Mychal.

B Michael was interviewed by The HistoryMakers on May 8, 2014.

See how B Michael is related to other HistoryMakers
Click Here To Explore The Archive Today!