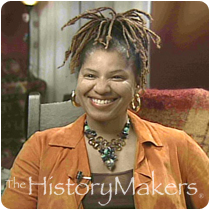 See how Ayoka Chenzira is related to other HistoryMakers

Ayoka Chenzira was born on November 8, 1953, in Philadelphia, Pennsylvania to Paul and Bernice Wilson. Chenzira was reared by her mother who owned a beauty parlor in the building where they lived in north Philadelphia. Pennsylvania. Chenzira played the cello, field hockey and studied ballet for a number of years. She attended private boarding school during high school. After graduation, she attended The College of New Rochelle in Westchester, New York, where she studied film and photography. Chenzira received her M.A degree in education from Columbia University and her B.F.A. degree in film production from New York University, where her thesis piece was Syvilla: They Dance to her Drum, a short film that documented the African American concert dancer, Syvilla Fort, who was her dance teacher.

Chenzira is a prolific film artist whose works include features, performance art, documentaries, experimental productions and animation. In fact, she is considered the first African American female animator. In 2002, Chenzira was invited to serve as the first William and Camille Cosby Endowed Professor in the Arts at Spelman College in Atlanta, Georgia, where she is creator and director of the Digital Moving Image Salon (DMIS) and teaches a year long research and production course. She also created and served as co-director of Oral Narratives and Digital Technology, a joint venture between Spelman College and the Durham Institute of Technology (DIT), where she designed and taught workshops primarily for Zulu students at DIT.

Chenzira lives in Atlanta, Georgia, and has one adult daughter.

See how Ayoka Chenzira is related to other HistoryMakers
Click Here To Explore The Archive Today!