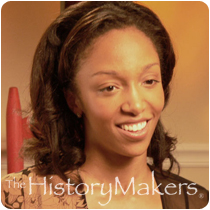 See how Ayisha McMillan Cravotta is related to other HistoryMakers

Ballerina Ayisha Nell McMillan Cravotta was born on February 21, 1978 in Golden Valley, Minnesota. In 1981, McMillan moved with her family to Oak Park, Illinois. McMillan began dance at the age of two at the Academy of Movement and Music and soon dreamed of becoming a ballerina. At the age of eleven, McMillan joined MOMENTA, the resident dance company of the Academy of Movement and Music. From 1989 to 1993, she danced with the Bryant Ballet, based in Chicago, where Homer Hans Bryant, former principal dancer with the Dance Theater of Harlem, became her mentor. With the Bryant Ballet, McMillan flourished in the multicultural environment where classical ballet and African dance forms were explored side by side.

At a young age, McMillan made extraordinary sacrifices for her craft. During the summer months, beginning in 1989, she attended the Boston Ballet School in Massachusetts where she was mentored by ballet great, Elaine Bauer. In addition, McMillan was selected for private instruction by Asaf and Mikhail Messerer of the Bolshoi Ballet. Later, Asaf Messerer lived in McMillan’s Oak Park home while he taught McMillan. She also received pre-professional intensive training in classical ballet and early American modern dance. She traveled between Oak Park, Boston and Houston, Texas and trained with the Houston Ballet during summer break.

In 1990, at age twelve, McMillan danced in the Soviet-American ballet production of Coppelia. She also attended the Soviet-American Ballet School. At thirteen, she attended the Von Heideke Ballet School. In 1992, when McMillan was fourteen years old, she won a full scholarship to the Houston Ballet Academy. After high school, McMillan attended Rice University, where she graduated as an anthropology and art history major while dancing professionally with the Houston Ballet.

In 2002, McMillan left Texas and joined the North Carolina Dance Theater where she danced in A Midsummer Night’s Dream among other productions. In 2004, she became the first African American dancer to play the role of Clara in The Nutcracker. McMillan retired from the stage in 2007 at the age of 29.
McMillan was interviewed by The HistoryMakers on June 19, 2007.

See how Ayisha McMillan Cravotta is related to other HistoryMakers
Click Here To Explore The Archive Today!