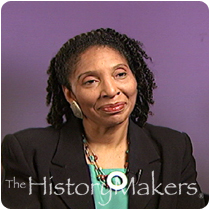 See how Avis LaVelle is related to other HistoryMakers
Donate Now

Avis LaVelle was born in Chicago, Illinois, on March 5, 1954. After graduating from Englewood High School, LaVelle attended the University of Illinois at Urbana Champaign, where she first started out majoring in physical education, but later changed her major to broadcasting. LaVelle later earned her master’s degree in business administration from the Keller School of Management at DeVry University.

After graduating from the University of Illinois, LaVelle worked at a radio station in Springfield, Illinois. Moving to Chicago, LaVelle continued her climb in the communications world, and by the early 1990s, she was serving as press secretary to Chicago Mayor Richard M. Daley. In 1992, LaVelle was picked by Bill Clinton to serve as his National Press Secretary during his campaign for president. Returning to Chicago after Clinton's presidency, LaVelle held a number of positions both in the government and the private sector. LaVelle served as the vice president of government and public affairs for the University of Chicago Hospitals; senior policy advisor for Illinois Governor Rod Blagojevich; and vice president of communications for Waste Management.

In 1997, LaVelle was appointed by Mayor Daley to the School Reform Board of Trustees, and in 1999, she served as his campaign manager while he successfully ran for reelection. LaVelle retired from the School Reform Board in 2003, and went on to serve on the board of the Chicago Cable Commission, and as a private consultant with her company, A. LaVelle Consulting Services LLC. In 2004 LaVelle was hired by the John Kerry-John Edwards 2004 presidential ticket to serve as Illinois campaign manager.

See how Avis LaVelle is related to other HistoryMakers
Donate Now
Click Here To Explore The Archive Today!