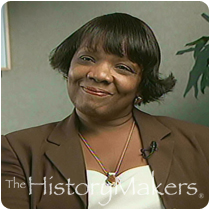 See how Aurie Pennick is related to other HistoryMakers
Donate Now

Executive director and treasurer of the Field Foundation of Illinois, Inc., Aurie Alma Pennick was born December 22, 1947 in Chicago, Illinois. Her parents, Aurie Watts and Burrell Baines migrated from Alabama and Mississippi, respectively. Pennick attended William G. Beale Elementary School and graduated from Englewood High School in 1965. At the University of Illinois at Chicago (UIC), then called the Chicago Circle Campus, Pennick became politically active. She worked for the election of Chicago’s first black female alderman, Anna Langford; she worked on voting registration as a civil rights volunteer in Jackson, Mississippi; she was a member of the Friends of the Panthers group and learned African American history from Dr. John Porter’s Englewood School of Human Dignity. By 1970, Pennick was working as a caseworker for the State of Illinois. In 1971, she earned her B.A. degree in the administration of criminal justice from UIC followed by her M.A. degree in the administration of criminal justice in 1981 and a law degree from John Marshall Law School in 1986.

Pennick headed the Chicago Abused Women Coalition, which opened Chicago’s first battered women’s shelter and Citizens Alert, a criminal justice awareness organization. In 1983, Mayor Harold Washington appointed Pennick to the Chicago Police Board. A participant in the Chicago Community Trust Minority Fellowship Program, Pennick joined the John D. and Catherine T. MacArthur Foundation as assistant director of Special Grants in 1984. In 1987, Pennick was managing attorney for the Chicago Transit Authority. From 1992 to 2002, she was president and CEO of the Leadership Council for Metropolitan Open Communities, the nation’s oldest fair housing organization. Pennick was chosen as an official U.S. delegate to the Habitat II Global Conference on Cities held in Istanbul, Turkey in 1996. In 2002, she was appointed executive director and CEO of the Chicago- based Field Foundation, which provides support for community, civic and cultural organizations in the Chicago area.

Pennick is the recipient of the Harold Washington Award for Distinguished Public Service from the Cook County Bar Association. She also was an Aspen Fellow in 2002 and garnered the Chicago Commission on Human Relations Award in 2003.

The mother of two children, Pennick lives in Grayslake, Illinois.

See how Aurie Pennick is related to other HistoryMakers
Donate Now
Click Here To Explore The Archive Today!