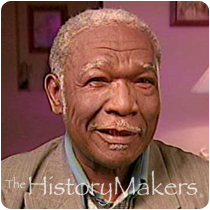 Favorite Color:
Green, Orange
Favorite Time of Year:
Summer
Favorite Vacation Spot:
Anywhere
Favorite Quote:
Only What You Do For Christ Will Last.

Favorite Color:
Green, Orange
Favorite Time of Year:
Summer
Favorite Vacation Spot:
Anywhere
Favorite Quote:
Only What You Do For Christ Will Last.

See how Augustus Colson is related to other HistoryMakers

Evangelist Augustus Colson was born to Minnie and Willie Colson in Chaires, Florida on May 25, 1936. He was the eldest of seven siblings and grew up in a religious family of four ministers. Determined to be in journalism, he practiced lettering art and graphics. Multi-talented, Colson graduated from Lincoln High School in 1955, with numerous awards in art. Colson's interest in journalism was finally realized at Alabama State College in Montgomery, under the tutelage of art professor Howard L. Oubre. In 1966, Colson graduated with a B.S. from Florida A & M University and turned his full attention to writing and art.

After several attempts to break into the media in Los Angeles, California without any success, Colson then returned to Tallahassee and started his own advertising production company. The company's resulting in-house publication, Church Times, was an instant success in showcasing local ministries. Furthermore, it provided a vehicle for the professional and personal growth and expansion of other graphic artists, illustrators, journalists, poets and photographers in the Georgia/Florida area. Church Times has been cited for its commitment to inspire and promote the rich traditions of Tallahassee's religious community since 1983.

See how Augustus Colson is related to other HistoryMakers
Click Here To Explore The Archive Today!