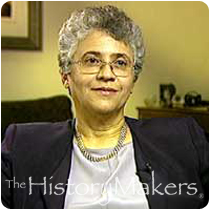 See how Audrey Peeples is related to other HistoryMakers
Donate Now

Former YWCA executive and women's rights advocate Audrey R. Peeples was born in Chicago on May 22, 1939 to Thelma and John Rone. For nearly thirty years, she has held leadership positions with some of Chicago's - and the country's - preeminent women's organizations.

Raised in Chicago, Peeples earned her B.A. degree in 1961 from the University of Illinois at Champagne. After twelve years working as a trust manager for Continental Bank, she became associate regional director for Girl Scouts USA in 1973. Three years later, she rose to executive director of the Girl Scouts of Chicago, and held the position until September 1987. At that time, she left the Girl Scouts to become CEO of the Young Women's Christian Association.

Under Peeples' leadership, the YWCA made significant inroads into helping improve the lives and rights of women. Peeples spearheaded efforts to end racist practices within the organization as well as to expand the YWCA's childcare initiative. Additionally, she promoted violence and pregnancy prevention for children and young teens, and introduced new cancer education and screening programs for women. Peeples' stewardship also saw the agency's annual budget quadruple, from $3 million to $12 million, enabling the YWCA to extend its offerings. In anticipation of her retirement, Peeples successfully recruited Patricia Ireland, former president of the National Organization for Women, to succeed her in 2001.

Peeples is currently the co-chair of the Alumnae Council of the Chicago Foundation for Women, and a member of the Executive Committee of the Chicago Community Trust. She has served on the Board of the Executive Services Corps, and as vice president of the ACLU of Illinois. She is on the Dean's Advisory Board of the School for New Learning at DePaul University, and is a member and past chair of the Chicago Network, an affiliate of the International Women's Forum. Peeples has also served on the Board of Directors of the United Way of Chicago the Chicago Foundation for Women, Junior Governing Board of the Chicago Symphony, and Girl Scouts of the USA. She is the recipient of the Thomas and Eleanor Wright Award from the City of Chicago Commission on Human Relations for her work on the YWCA's Racial Justice Program.

Peeples was married for twenty-nine years to Anthony Peeples, who died in 2001. They have two children, Jennifer and Michael. Peeples lives in Chicago.

See how Audrey Peeples is related to other HistoryMakers
Donate Now
Click Here To Explore The Archive Today!