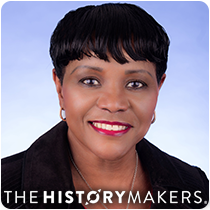 Favorite Color:
Purple
Favorite Food:
Snapper
Favorite Time of Year:
Fall
Favorite Vacation Spot:
Cape Town, South Africa
Favorite Quote:
It's Not That You Can't Do Something It's How You Can Get It Done.

Favorite Color:
Purple
Favorite Food:
Snapper
Favorite Time of Year:
Fall
Favorite Vacation Spot:
Cape Town, South Africa
Favorite Quote:
It's Not That You Can't Do Something It's How You Can Get It Done.

See how Audrey M. Edmonson is related to other HistoryMakers

In 1997, she was elected as a councilperson to the Village of El Portal City Council in Florida. In 1999, she was elected mayor of the Village of El Portal, Florida and became the city’s second African American mayor. During the same year, Edmonson began working as a trust specialist in the Miami Dade Public School system. Edmonson was re-elected three successive terms and became the municipality's first mayor to be elected by residents rather than by the members of the Village Council. Under her leadership, the Village hired its first Village Manager. In 2005, when she was elected as commissioner for the 3rd District on the Miami-Dade County Commission. She was re-elected three more times and in 2010 and 2016, she was elected to serve as vice chair. In 2018, Edmonson was elected to serve as president of the Miami-Dade County Commission.

Edmonson was chairwoman of the Housing and Social Services Committee and the Building Safer Neighborhoods Sub-Committee. She also served as vice chairwoman of the Transportation and Public Works Committee and the Chairman’s Policy Council, and as a member of the Youth Crime Task Force. She served as the vice chairwoman of the Miami Dade Expressway Authority (MDX) Board of Directors. Edmonson was appointed to the Miami-Dade County HIV/AIDS “Getting to Zero” Task Force and served as Chairwoman of the Florida Department of Transportation (FDOT) I-395 Signature Bridge-Aesthetic Steering Committee. She also serves on the Miami-Dade Economic Advocacy Trust and the Public Health Trust nominating councils, the Public Health Trust/Miami-Dade Annual Operating Agreement Committee, the Jackson Health System Obligation Bond Citizens’ Advisory Committee and the County Advisory Task Force for the Byrne Criminal Justice Innovation Program Planning and Implementation Project which is referred locally as Project PEACE: People Engaged and Advocating for Community Empowerment. Vice Chairwoman Edmonson serves as the Vice Chair of the International Trade Consortium Board.

In addition to her work as a city commissioner, Edmonson was also involved in many different community organizations. She was a member of the Top Ladies of Distinction, Inc. and the Links, Incorporated. She also helped create the Miami Children’s Initiative in 2006, where she served as a board member. Edmonson served as a board member for the Frost Science Museum, the JMH Citizen’s Advisory Board, and the JMH Nominating Committee. Edmonson was recognized for her community work by South Florida Magazine, which named her one of “South Florida’s 50 Most Powerful Black Professionals.”

Audrey M. Edmonson was interviewed by The HistoryMakers on March 10, 2017.

See how Audrey M. Edmonson is related to other HistoryMakers
Click Here To Explore The Archive Today!