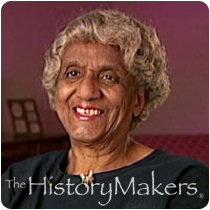 Favorite Color:
Black
Favorite Food:
Chicken
Favorite Vacation Spot:
Anywhere
Favorite Quote:
Anything I Want To Do I Can Do It. It May Take A Little Longer But I'll Do It.

Favorite Color:
Black
Favorite Food:
Chicken
Favorite Vacation Spot:
Anywhere
Favorite Quote:
Anything I Want To Do I Can Do It. It May Take A Little Longer But I'll Do It.

See how Audrey Grevious is related to other HistoryMakers
Donate Now

Social activist Audrey Grevious was born in Lexington, Kentucky, in 1930 and has remained there most of her life. After graduating from Dunbar High School, she attended Kentucky State University in Frankfort, earning a B.A. in elementary education, and later earned a master's in administration from Eastern Kentucky University in Richmond.

After graduating, Grevious first taught at, and later became principal of Kentucky Village, a state reformatory for delinquent boys. Following the closing of the school, she taught in Fayette County Public Schools, where she remained until she retired. More than a teacher, Grevious also became active with the NAACP in the late 1940s. She also became active with the Congress on Racial Equality (CORE). As the civil rights movement heated up, Grevious rose to become the president of the Lexington chapter of the NAACP while her friend and vice president Julia Lewis became the president of CORE. The two brought the two organizations together, organizing protests, pickets and sit-ins, and successfully and peacefully achieved their objectives. This marked the first time that the NAACP and CORE had worked together, as ideological differences at the national level had previously kept the groups apart.

Over the years, Grevious has remained involved with the NAACP. Since her retirement, she has become involved in a number of organizations. She currently serves on the board of directors of The Humanitarium, an organization devoted to celebrating diversity. She is also a member of the board of the Community Reinvestment Housing Project, which provides counseling to first-time homebuyers, a member of the board and the former president of Kentucky Tech, and the secretary of her church, Pilgrim Baptist. She is also the president of the Elder Crafters, an organization of senior citizens who make crafts. As a group, they enjoy bowling, and Grevious' home is filled with trophies from the sport.

See how Audrey Grevious is related to other HistoryMakers
Donate Now
Click Here To Explore The Archive Today!