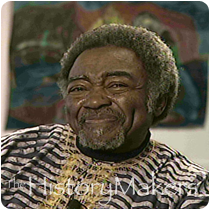 See how Askia Toure' is related to other HistoryMakers

Professor and poet Askia M. Touré was born on October 13, 1938, in Raleigh, North Carolina, to Clifford Roland Snellings, Jr. and Nannie Lynette Bullock. Growing up, Touré attended Willard and Wogaman elementary schools. In 1952, Touré won a Motion Poetry Association Award while attending Roosevelt High School. Two years later, he participated in a successful sit-in at Roosevelt. Touré graduated from high school in 1956, and joined the United States Air Force. While serving alongside Robert Green of the Flamingos and Little Willie John, Touré wrote a letter to Congressman Adam Clayton Powell that resulted in a government investigation of racism at Wordsmith Air Force Base in Michigan.

After being discharged in 1959, Touré took art classes at the Dayton Art Institute. He then moved to New York City and joined the Art Student League and the Umbra Poets. He and his associates Tom Feelings, Tom Dent, David Henderson, and Calvin Herndon were mentored by Langston Hughes. Touré participated in the Fulton (Street) Art Fair in Brooklyn in 1961 and 1962, and the Black Arts Academy. Influenced by artists and writers such as Ernest Crichlow, Jacob Lawrence, Leo Carty, Elombe Brathe, Ronnie Braithwaite, Bob and Jean Gumbs, and Rose Nelmes of the Grandessa Models, Touré became a poet who championed a black aesthetic.

In 1961, Touré joined Max Roach, Abby Lincoln, Alex Prempe, May Mallory, and Maya Angelou at the United Nations to protest the assassination of Congo’s Patrice Lumumba in 1961. In 1962, Touré became an illustrator for Umbra magazine, a staff member with The Liberator magazine, and a contributor to Freedomways. Touré was a part of the Atlanta staff of the Student Nonviolent Coordinating Committee (SNCC) and joined the Revolutionary Action Movement (RAM) in Mississippi in the Spring of 1964. In 1965, Touré founded Afro World and organized the Harlem Uptown Youth Conference. Touré also participated in the rise of the Black Panther Party and co-wrote SNCC’s 1966 “Black Power Position Paper.”

In 1967, Touré joined the staff of Nathan Hare at San Francisco State University and taught African history in the first Africana Studies Program. Touré organized the 1984 Nile Valley Conference in Atlanta and co-founded the Atlanta chapter of the Association for the Study of Classical African Civilizations (ASCAC) in 1986. Touré authored multiple books and received the 1989 American Book Award for Literature (From the Pyramids to the Projects) and the 2000 Stephen E. Henderson Poetry Award (Dawnsong); other works include films and plays. In 1996, Touré was honored with the Gwendolyn Brooks Lifetime Achievement Award from the Gwendolyn Brooks Institute in Chicago, Illinois.

See how Askia Toure' is related to other HistoryMakers
Click Here To Explore The Archive Today!