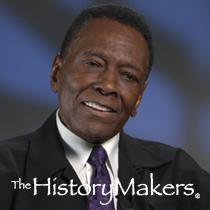 Favorite Color:
Black
Favorite Food:
Fried Chicken, Collard Greens
Favorite Time of Year:
Fall
Favorite Quote:
The Arts Ignite The Mind. They Give You The Possibility To Dream And Hope.

Favorite Color:
Black
Favorite Food:
Fried Chicken, Collard Greens
Favorite Time of Year:
Fall
Favorite Quote:
The Arts Ignite The Mind. They Give You The Possibility To Dream And Hope.

See how Arthur Mitchell is related to other HistoryMakers

Dancer, choreographer and artistic director Arthur Mitchell was born on March 27, 1934 in Harlem, New York to Arthur Mitchell, Sr. and Willie Hearns Mitchell. He attended the High School of Performing Arts in Manhattan. In addition to academics, Mitchell was a member of the New Dance Group, the Choreographers Workshop, Donald McKayle and Company, and High School of Performing Arts’ Repertory Dance Company. After graduating from high school in 1952, Mitchell received scholarships to attend the Dunham School and the School of American Ballet.

In 1954, Mitchell danced on Broadway in House of Flowers with Geoffrey Holder, Louis Johnson, Donald McKayle, Alvin Ailey and Pearl Bailey. He joined John Butler’s dance company in Europe before Lincoln Kirstein, general director of the New York City Ballet (NYCB), invited him to join NYCB’s corps de ballet. Mitchell became the first African American permanent member of a major American ballet company in 1955, when he performed with Tanaquil Le Clercq in Western Symphony. Then, in 1957, famed ballet choreographer George Balanchine choreographed Agon pas de deux, considered to be the first interracial duet in American ballet, for Mitchell and Diana Adams. Balanchine choreographed the role of Puck in A Midsummer Night’s Dream for Mitchell, as Mitchell performed in a succession of NYCB productions, including Bugaku and Arcade, throughout the 1950s and 1960s. In 1966, Mitchell organized the American Negro Dance Company, which represented the U.S. at the first World Festival of Negro Arts in Dakar, Senegal. Mitchell then founded the National Ballet Company of Brazil in Rio de Janeiro in 1968. Mitchell, with mentor and friend Karel Shook, co-founded the Dance Theatre of Harlem in 1969, the first black classical ballet company, which debuted at the Guggenheim Museum in New York City in 1971. Throughout the 1970s and 1980s, the Dance Theatre of Harlem produced ballets, including Dougla, Troy Game, The Firebird and Creole Giselle. When the Dance Theatre of Harlem performed in South Africa in 1992, it launched its international outreach program, Dancing Through Barriers, designed to educate children in dance through master classes and open rehearsals.

Mitchell received numerous awards. In 1993, he was recognized by the Kennedy Center Honors, and was named a MacArthur Genius Fellow in 1994. President Bill Clinton presented Mitchell with a U.S. National Medal of Arts in 1995. Then, in 1999, Mitchell was inducted into the National Museum of Dance and Hall of Fame, the only U.S. museum dedicated exclusively to dance. He received the Heinz Award in Art and Humanities in 2001, and was featured in a PBS American Masters documentary, Balanchine in 2004. Between 2009 and 2010, the exhibit “Dance Theatre of Harlem: 40 Years of Firsts” premiered in New York City and Los Angeles. Columbia University’s Rare Book & Manuscript Library acquired Mitchell’s archives, its first major dance collection, in 2015.

Arthur Mitchell was interviewed by The HistoryMakers on October 6, 2016.

See how Arthur Mitchell is related to other HistoryMakers
Click Here To Explore The Archive Today!