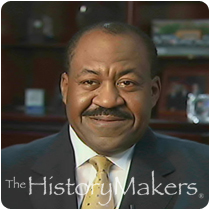 Favorite Color:
Black
Favorite Food:
Steak
Favorite Time of Year:
Fall
Favorite Vacation Spot:
Maui, Hawaii
Favorite Quote:
Do Unto Others As You Would Have Them Do Unto You.

Favorite Color:
Black
Favorite Food:
Steak
Favorite Time of Year:
Fall
Favorite Vacation Spot:
Maui, Hawaii
Favorite Quote:
Do Unto Others As You Would Have Them Do Unto You.

See how Arthur H. Harper is related to other HistoryMakers

Arthur Henry "Art" Harper, President and CEO of General Electric (GE) Equipment Services, based in Stamford, Connecticut, was born in Trenton, New Jersey on December 3, 1955 to Eleanor Graham Harper from Philadelphia, Pennsylvania, a maid, and Joseph Harper from Harlem, New York. Harper received his B.A. degree in chemical engineering from the Stevens Institute of Technology in 1978.

For four years following graduation, Harper worked as a technical sales representative in the Chemical Division of Conoco, Incorporated in Houston, Texas. In 1983, he became a marketing representative for the Polymer Products Department of the DuPont Corporation. Harper joined GE Plastics in 1984 as a market development and aerospace specialist and as the aircraft application program manager. He was appointed to the position of district sales manager for GE Silicones in Brea, California in 1987, and was named as manager of the Plastics plant in Oxnard in 1991. In 1992, Harper was put in charge of crystalline materials in Pittsfield, Massachusetts and in 1994, became head of the LEXAN® (polycarbonate resin, a high performance plastic) business. In 1996, he served as president of GE Plastics of Greater China. Harper was then appointed Vice President of Global Manufacturing for GE Plastics in Bergen Op Zoom, the Netherlands in 1998. In May 2000, he became President and Senior Managing Director for GE Plastics Europe.

Harper received the Black Achievers in Industry Award in 1994 and the Career Achievement Award at Stevens Institute of Technology in 1998. He received the Social Justice Hero Award from the Fairfield County Region National Conference for Community and Justice, and the Whitney M. Young, Jr. Service Award from the Boy Scouts of America Greater New York Councils in 2004. Additionally, he is a member of the Executive Committee of GE's African American Forum and serves as Chair of the Stamford Commission on Education Achievement. He is also a board member of the Yerwood Center, a non-profit community center in Stamford, Connecticut.

See how Arthur H. Harper is related to other HistoryMakers
Click Here To Explore The Archive Today!