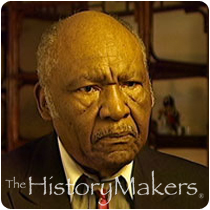 See how Arthur Fletcher is related to other HistoryMakers
Donate Now

Civil rights activist and affirmative action champion Arthur A. Fletcher was born in Phoenix, Arizona, in 1924. As a child, Fletcher's parents moved frequently. Fletcher graduated from high school in Junction City, Kansas; from there he attended Washburn University, earning degrees in political science and sociology. Fletcher later went on to earn his law degree and his Ph.D. in education.

Fletcher organized his first civil rights protest while still in high school after being told that African American student photographs would be included in the back of the yearbook. After graduating from high school, Fletcher served in World War II under General George Patton and earned a Purple Heart. Fletcher joined the Los Angeles Rams in 1950 and later became the first African American to play for the Baltimore Colts.

Fletcher entered politics in 1954, when he worked on Fred Hall's gubernatorial campaign, and took a position working for the Kansas Highway Commission; he took the knowledge of government contracts he gained there to encourage African American businesses to bid on contracts. After moving to Washington, Fletcher worked a number of government jobs, eventually becoming the special assistant to the governor in 1969. That same year, President Richard Nixon appointed Fletcher to the office of assistant secretary of wage and labor standards in the Department of Labor. While serving in this capacity, Fletcher devised the Philadelphia Plan, which enforced equal employment and business opportunities for minorities. In 1972, Fletcher joined the United Negro College Fund as executive director, and coined its slogan, “A mind is a terrible thing to waste.” Fletcher later returned to government service when President Gerald Ford appointed him to the office of deputy of urban affairs. In this role, Fletcher came to be known as the father of the affirmative action enforcement movement.

Fletcher was appointed to the U.S. Commission on Civil Rights in 1990, where he served until 1993 as chairman and a commissioner. In 1996, prompted by Senator Bob Dole's reversal of his forty-year affirmative action policy, Fletcher made a run for the presidency; he later became president and CEO of Fletcher's Learning Systems and publisher of USA Tomorrow/The Fletcher Letter.

Fletcher spent a great deal of time touring the country for speaking engagements on equal opportunity rights and the benefits of affirmative action, and served as the chairman of the National Black Chamber of Commerce. Fletcher wrote several articles that appeared in magazines such as Ebony and Fortune, in addition to authoring a book entitled My Hour of Power.

Arthur A. Fletcher passed away on July 12, 2005; he was survived by his wife, Bernyce Fletcher.

See how Arthur Fletcher is related to other HistoryMakers
Donate Now
Click Here To Explore The Archive Today!