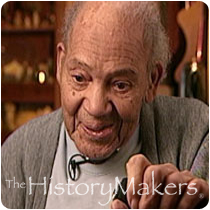 See how Arthur Burton, Sr. is related to other HistoryMakers
Donate Now

Arthur Burton, Sr., one of the Pullman Porters was born September 10, 1903, in Winterville, Mississippi. Burton was the oldest of five children. When Burton's mother, who ran a small store, died when he was twelve years old, he accompanied his father to Earl, Arkansas for construction work. His father was a carpenter and Burton helped him build "shotgun houses," small shacks in which one could look through the front door and see straight through to the back.

One Saturday, dressed in his favorite shirt, Burton with the other youngsters "flipped" a train. Burton, who had not mastered the technique, jumped off at the wrong time and was flung down an embankment severely lacerating his head and cracking his skull. He carried a deep scar in his head for the rest of his life. Burton finished grade school when he was in his twenties.

In 1930, he was hired by The Pullman Company and was soon assigned to the Santa Fe Super Chief, California Limited, and the Scout, among others. Being a porter consisted mostly of making beds and cleaning up, but what was most difficult was the way Pullman treated the black porters. Often management would forget to feed porters not adjacent to dining cars. The hours were also grueling. Porters were officially allowed four hours of sleep a night. Working twenty days a month, Porters would average about two hours of sleep a night. The pay was about half that of factory workers. These factors and the blatant disrespect by management and the public, who referred to all porters as "George" caused them to organize behind A. Phillip Randolph in 1924.

Ten years of struggle yielded victory on August 21, 1935. Burton, now living in Chicago, was a member of the Union of Sleeping Car Porters and drove local leaders to and from headquarters at 43rd and Michigan Avenue. Burton was a porter for thirty-eight years and six months. He met celebrities like Gloria Swanson, Bob Hope, Buck and Bubbles, Jack Benny and Eddie Rochester Anderson. Burton was proudest of the fact that with his own hands, he built his own house and that of his son; author Arthur Burton, Jr. in Phoenix, Illinois.

See how Arthur Burton, Sr. is related to other HistoryMakers
Donate Now
Click Here To Explore The Archive Today!