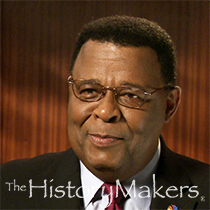 See how Art Norman is related to other HistoryMakers

Broadcast journalist Art Norman was born in New York City, New York. Norman graduated with his B.S. degree in math and physics from Johnson C. Smith University, where he was a member of the Omega Psi Phi Fraternity. He has also received a first class F.C.C. engineer’s license.

Norman began his broadcasting career in 1969 when he was hired as a television engineer at WCCB-TV in Charlotte, North Carolina. Throughout the 1970s, he worked as a reporter at WPCQ-TV and WSOC-TV, both located in Charlotte; and, in 1976, he served as a writer and photographer on the George Foster Peabody Award winning edition of NBC's "Weekend Magazine." Norman was then hired as a reporter and weekend anchor for Baltimore, Maryland’s WMAR-TV in 1979. In July of 1982, he joined WMAQ-TV NBC5 in Chicago, Illinois as a general assignment reporter. At WMAQ, Norman went on to cover breaking news, anchor broadcasts and cultivate community-oriented feature segments, including the popular “Art Norman’s Chicago.” He retired from WMAQ in 2009, but returned on a part-time basis as a special contributor in 2012.

Norman has received many awards throughout his career. He won North Carolina's RTNDA Award for his coverage of a fatal air balloon crash in 1975, and his documentary on the plight of poor children won a 1978 School Bell Award from the National Association of Educators. He received a 1984 International Radio and Television News Directors Award and a 1987 Wilbur Award; his hosted series, "Cops and Robbers," was honored with two prestigious awards: a national Investigative Reporters and Editors Award and an Associated Press Award for "Best Investigative Reporting." Norman was an integral part of NBC5's coverage of the Beirut hostage crisis, which earned him a 1986 Emmy Award. He also received Emmys for his contributions to NBC5's coverage of the Laurie Dann spot news story; his spot news coverage of the Fox River Grove Bus Crash; and his contribution to NBC5's coverage of the Chicago Auto Show. In all, Norman has earned six Emmy Awards.

Norman's involvement with the Chicago community has also been extensive. In addition to hosting numerous community events each year, he is a spokesman for the United Negro College Fund and serves as an on-air host of their telethon. He is also a frequent NBC 5 News ambassador.

Norman is married and lives in Evanston, Illinois.

Art Norman was interviewed by The HistoryMakers on October 21, 2014.

See how Art Norman is related to other HistoryMakers
Click Here To Explore The Archive Today!