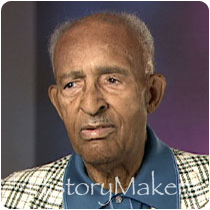 See how Art Minson is related to other HistoryMakers
Donate Now

Respected community activist Art Minson has made community service a lifetime commitment. The Akron, Ohio, resident was known for tireless efforts to organize people and advocate for his community, particularly Akron’s East Side. Minson was born in West Virginia in 1914 and later moved to Akron from the Deep South when he was 5 years old. For more than forty years, Minson was an employee of Goodyear, where he retired in 1980 as a racing tire inspector. Active as an official with the United Rubber Workers, Minson continued to advocate for higher wages for workers in Akron, a city devastated by an increasingly global economy. Recognizing his special talent for organizing people, Minson has spent a lifetime involved in various community service causes.

Minson was particularly active through his church. More than twenty years ago, Minson helped start a food pantry at his church to serve the hungry. He also began a project designed to educate people in the community. Minson was a board member of Ohio Citizen Action and active with East Akron Community House and National Peoples Action. Minson acted as an adviser to the Millennium Children’s Fund and was instrumental in establishing the East Akron Development Corporation.

In May 2002, the Akron community presented him with the Cliff Skeen Lifetime Achievement Award for a life spent in service to his community. After a half-century as an activist and community servant, Minson continued to act on his belief that community organizing can make a difference. Minson passed away on December 14, 2005.


See how Art Minson is related to other HistoryMakers
Donate Now
Click Here To Explore The Archive Today!