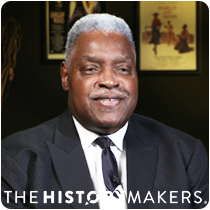 Football player and coach Art Shell was born on November 26, 1946 in Charleston, South Carolina to Art Shell Sr. and Gertrude Shell. Shell graduated from Bonds-Wilson High School in 1964, and earned his B.S. degree in industrial arts education from Maryland State University in Princess Anne, Maryland in 1968.

After graduating from Maryland State University, Shell was drafted by the American Football League to play offensive tackle for the Oakland Raiders. In 1977, Shell earned his first Super Bowl ring after the Oakland Raider’s victory against the Minnesota Vikings in Super Bowl XI. He then played in Super Bowl XV in 1981 in which the Oakland Raiders defeated the Philadelphia Eagles. Shell also competed in eight Pro Bowls, and was named to the AP First Team All-Pro in 1974 and 1977, and to the AP Second-Team All Pro in 1975 and 1978. He played a total of 207 games with the team from 1968 to 1982. After retiring as a player in 1983, Shell became an offensive line coach for the Los Angeles Raiders. In 1989, Shell was promoted to head coach of the Raiders, making him the first African American head coach in the National Football League in the modern era. Shell left the team in 1994, and became an offensive line coach for the Kansas City Chiefs in 1995; and from 1997 to 2000, he served as an offensive line coach for the Atlanta Falcons. Shell also served as a senior vice president in charge of football operations for the NFL, before returning to coach the Oakland Raiders for the 2006-2007 season.

Art Shell was interviewed by The HistoryMakers on March 7, 2018.