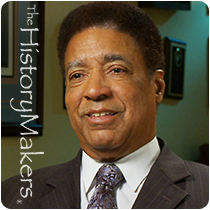 See how Art Gilliam, Jr. is related to other HistoryMakers

Radio station owner Art Gilliam was born on March 6, 1943 in Nashville, Tennessee to Leola Hortense Caruthers and Herman Arthur Gilliam, Sr. Gilliam attended the Westminster School in Connecticut, and, at the age of sixteen, enrolled in Yale University. He graduated with his B.A. degree in economics from Yale University in 1963 and then joined the U.S. Air Force Reserve. Gilliam went on to receive his M.B.A degree from the University of Michigan in 1967.

Upon graduation, Gilliam returned to Memphis, Tennessee to work with his father at Universal Life Insurance Company, where he remained until 1975. In 1968, he began writing a weekly editorial for The Commercial Appeal and was hired by WMC-TV in Memphis as the weekend news anchor. Gilliam was the first African American to write for The Commercial Appeal and the first African American on-air reporter and anchor on Memphis television at WMC-TV. Then, from 1975 to 1976, he worked as an administrative assistant to U.S. Congressman Harold Ford, Sr.

Gilliam’s WLOK has earned the title of #1 Gospel Station in the nation by Religion & Media Quarterly for several consecutive years; and, in 1997, was recognized by the Tennessee Historical Commission as a Tennessee Historical Landmark. Gilliam has also received the Black History Men of Honor Leadership Award, the Gospel Bridge Lifetime Achievement Award, the Rainbow/PUSH Martin Luther King, Jr. Award, the Memphis Advertising Federation's Silver Medal Award, and the Downtown Memphis Commission’s Visionary Award. He was also honored with the Alpha Kappa Alpha Sorority Outstanding Community Service Award, Omega Psi Phi Fraternity Citizen of the Year Award, Phi Beta Sigma African American Male Image Award, and the Delta Sigma Theta’s Outstanding Community Service and Florence Cole Talbert McCleave Awards. In addition, Gilliam was recognized as one of the “Top 25 African Americans in Radio” by Radio Ink Magazine’s, and one of “Ten Outstanding Young Men in America” by the United States Jaycees.

Gilliam has sat on the boards of the Memphis Advertising Federation, the Society of Entrepreneurs, Memphis Zoo, Inc., the National Federation of State Humanities Council, and Lemoyne-Owen College. He served as chairman of the Black Business Association of Memphis and the Tennessee Humanities Council, and was an advisory board member of the University of Memphis College of Communications and the Memphis Sheriff’s Department. Gilliam is also a member of the Tennessee Association of Broadcasters, Leadership Memphis, NAACP, and Leadership Music – Nashville.

Art Gilliam was interviewed by The HistoryMakers on April 26, 2014.

See how Art Gilliam, Jr. is related to other HistoryMakers
Click Here To Explore The Archive Today!