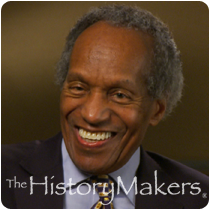 "Everything comes to he that waiteth, if he worketh while he waited."

Chemical engineer and corporate oil executive Arnold Stancell was born on November 16, 1936 in Harlem, New York to Maria Lucas, a seamstress and Francis Stancell, a musician. He lived with his single mother and was focused on his education throughout his youth. After passing competitive exams to attend Stuyvesant High School, Stancell went on to City College of New York where he graduated magna cum laude with his B.S. degree in chemical engineering in 1958. Stancell was awarded a graduate fellowship from the Massachusetts Institute of Technology (MIT) and became the first African American to earn his Ph.D. degree from MIT in chemical engineering in 1962.

After graduation, Stancell worked at Mobil Oil Corporation from 1962 to 1970, researching new chemical and plastic products. During this time, he was awarded eleven patents for new plastics processes and plasma (ionized gas) reactions for new products. In 1970, Stancell took a leave of absence from Mobil Oil to teach at MIT. He started a research program on plasma reactions at surfaces and his student, David Lam, went on to found Lam Research, the preeminent company worldwide in plasma etching of circuits into the surface of silicon chips. In 1971, Stancell declined a tenured professorship position at MIT to return to Mobil Oil. He continued to excel at Mobil, becoming vice president of Mobil Plastics in 1976 and led the commercialization of a new plastic film that revolutionized packaging and replaced cellophane. In 1982 he became vice president of Mobil Europe Marketing and Refining based in London. He then progressed through a number of additional executive positions becoming vice president of oil and natural gas Exploration and Production in 1989 responsible for finding and developing oil and natural gas reserves in the U.S., Europe, the Middle East and Australia. Stancell initiated, negotiated and launched the now $70 billion liquefied natural gas production joint venture between Mobil and Qatar which sells natural gas to markets worldwide.

In 1993, he retired from Mobil after a thirty-one year career and a year later accepted George Institute of Tecnology’s invitation to join its faculty as professor of chemical engineering. He became the Turner Professor of Chemical and Biomolecular Engineering in 2001, and in 2004 retired as Professor Emeritus. After the 2010 British Petroleum (BP) oil spill, Stancell consulted and advised the United States Department of Interior. In 2011, he was appointed by President Barack Obama to the National Science Board.

Stancell has received numerous recognitions including the American Institute of Chemical Engineers National Award for Chemical Engineering Practice, Career Achievement Award of City College of New York, Professional Achievement Award of the National Organization for the Professional Advancement of Black Chemists and Chemical Engineers and in 1992 was named Black Engineer of the Year. In 1997, he was inducted into the National Academy of Engineering and in 2009, was elected to its Board. In 2010, he was appointed to the Governing Board of the National Research Council. He has also received numerous outstanding teacher awards. Arnold Stancell is married to artist Constance Newton Stancell.

Arnold Stancell was interviewed by The HistoryMakers on May 14, 2012.