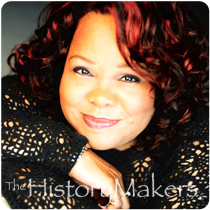 See how Armelia McQueen is related to other HistoryMakers

Actress Armelia McQueen was born on January 6, 1952 in Southern Pines, North Carolina to James and Kathleen McQueen. McQueen's parents divorced, and her mother married Robert Brown in New York. As a child, McQueen was raised in Brooklyn, New York where she performed in church plays. She attended P.S. 44 and P.S. 258 and graduated from New York City’s Central Commercial High School in 1969. Afterwards, McQueen briefly enrolled at the Fashion Industry School, where she majored in fashion design. In 1972, she attended the Herbert Berghoff Drama School.

McQueen’s acting career began when she was hired for a role in the production of, Hot & Cold Heroes. She was then hired in 1976 for the role of Tune Ann in the cult classic film Sparkle. Then, in 1978, she made her Broadway debut in the original production of, Ain’t Misbehavin’ ,appearing alongside Irene Cara, Ken Page and Nell Carter. She went on to win a Theatre World Award for Best Debut Performance and appeared in several Broadway productions, including Five, Six, Seven, Eight, Dance and Harrigan and Hart. She also appeared with the national touring companies of the following shows: South Pacific, Jesus Christ Superstar and Hair. During the 1980s, McQueen made several appearances in various films, made-for-television movies and sitcoms including Mr. Belvedere, Frank’s Place, Action Jackson and No Holds Barred.

Later in 1990, she was featured as Whoopi Goldberg’s on screen sister when she starred in the film Ghost. McQueen continued her work throughout the 1990s by appearing in episodes of The Fresh Prince of Bel-Air, Martin and Living Single. She was nominated for the Best Supporting Actress Cable Ace Award for her role as Red Queen on the Disney Channel series, Adventures in Wonderland. Her other credits include Bulworth, All About the Andersons, JAG and That’s So Raven. McQueen currently lives in Los Angeles, California.

Armelia McQueen was interviewed by The HistoryMakers on April 3, 2008.

See how Armelia McQueen is related to other HistoryMakers
Click Here To Explore The Archive Today!