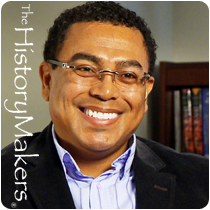 Favorite Color:
Aquamarine
Favorite Food:
Belizian Food
Favorite Time of Year:
Easter
Favorite Vacation Spot:
Belize
Favorite Quote:
Do Unto Others As You Would Have Them Do Unto You.

Favorite Color:
Aquamarine
Favorite Food:
Belizian Food
Favorite Time of Year:
Easter
Favorite Vacation Spot:
Belize
Favorite Quote:
Do Unto Others As You Would Have Them Do Unto You.

See how Arlie Petters is related to other HistoryMakers

Mathematician, physicist and business professor Arlie Petters was born on February 8, 1964 in Dangriga, Belize. As a child, he lived with his grandparents and was captivated by the mystery of the skies. In 1979, Petters left Belize to live with his mother in the United States. After graduating from Canarsie High School in Brooklyn, New York, Petters enrolled at Hunter College. Family problems left Petters homeless, but he received a Minority Access to Research Careers Fellowship that allowed him to stay in school. In 1986, Petters graduated from Hunter College with his B.A/M.A. interdisciplinary degree in mathematics and physics. He continued his studies with a dual concentration in mathematics and physics at the Massachusetts Institute of Technology (MIT), earning his Ph.D. degree in 1991. His doctoral thesis was entitled “Singularities in Gravitational Microlensing." During the summers of 1986 to 1991, Petters worked as a Corporate Research Fellowship Program (CRFP) Fellow at Bell Laboratories.

Following graduation, Petters became an instructor of pure mathematics at MIT. In 1993, Petters joined the faculty of Princeton University as an assistant professor of mathematics. He served as the co-director of graduate studies in mathematics from 1996 to 1998. Petters left Princeton in 1998 to join the faculty of Duke University as the William and Sue Gross Associate Professor. Petters was the lead author of the book, Singularity Theory and Gravitational Lensing in 2001, which outlined the first single mathematical theory to explain gravitational lensing. He became a full professor in 2003 and was the first African American at Duke University to receive tenure in the mathematics department. In 2005, Petters founded the Petters Research Institute to train Belizean students in the STEM disciplines. In 2008, he received a triple appointment to the departments of mathematics, physics and business administration, and in 2009, he was awarded the Benjamin Powell endowed chair. In 2010, Petters was appointed to serve as chairman on the Council of Science Advisors to the Prime Minister of Belize.
He also served as visiting professor at the Max-Planck-Institut für Astrophysik, Oxford University, Harvard University, Princeton University and was a Martin Luther King Jr. visiting professor of physics at MIT.

Petters has received numerous awards including the Sloan Research Fellowship and the National Science Foundation Early Career Grant Award. He was the first recipient of the Blackwell-Tapia Prize in Mathematical Science. He also received much recognition for his philanthropic efforts in Belize including the Award for Service to the Educational Development of Belize from the Friends in Support of the Diocese in Belize. Petters was also named by the Queen of England to Membership in the Most Excellent Order of the British Empire. Petters served on the Board of Governors for the Institute for Mathematics and its Applications and on the Board of Trustees for the Institute of Pure and Applied Mathematics. He is a member of the American Mathematical Society, American Astronomical Society and the Royal Astronomical Society. Petters lives with his wife Elizabeth Petters in Durham, North Carolina.

Arlie Petters was interviewed by The HistoryMakers on February 21, 2012.

See how Arlie Petters is related to other HistoryMakers
Click Here To Explore The Archive Today!