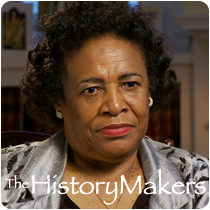 See how Arlene Maclin is related to other HistoryMakers
Donate Now

Physicist and education administrator Arlene P. Maclin was born in Brunswick County, Virginia on June 7, 1945 to parents Otis Armstead and Alice Matthews Maclin. Maclin attended Hickory Run Elementary School and Rawlings Elementary School, and graduated from James Solomon High School in 1963. Upon graduation, Maclin enrolled at North Carolina Agricultural and Technical University, where she graduated with her B.S. degree in engineering physics in 1967. Maclin went on to earn her M.S. degree in theoretical nuclear physics from the University of Virginia in 1971, and her Ph.D. degree in theoretical solid state physics from Howard University in 1974.

Throughout her career, Maclin has served as a researcher and educational administrator for several major institutions. She served as a research physicist at MIT’s Lincoln Laboratory and as a visiting scientist at Oak Ridge National Laboratory. In 1980, Maclin was appointed program director for the National Science Foundation, and from 1981 to 1983, she was the Senior Applied Research Physicist at the Central Intelligence Agency. Her academic service includes more than fifteen years of teaching at the levels of associate and full professors, and with administrative experience at the level of associate dean and director or of research. From 2002 to 2009, Maclin served as professor of optical engineering and director of the Intelligence Community Center for Academic Excellence at Norfolk State University, where she received research grants totaling $10 million and developed graduate programs in optical engineering and electronics engineering. In 2011, Maclin was appointed as the executive director of the MAC-CAE Program and adjunct professor of physics at Morgan State University.

Maclin is a member of American Physical Society, the Institute of Electrical and Electronics Engineers and the Materials Research Society. She served as the primary program staff for the Materials Science and Engineering Report and the International Survey of Atomic and Molecular Science, which were published by the National Research Council. For her many contributions and accomplishments, Maclin was selected for inclusion in Who’s Who Among Black American, International Who’s Who of Women, and Who’s Who in America.

Arlene Maclin was interviewed by The HistoryMakers in January 14, 2013.

See how Arlene Maclin is related to other HistoryMakers
Donate Now
Click Here To Explore The Archive Today!