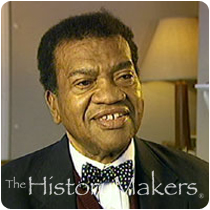 See how Archie C. Epps, III is related to other HistoryMakers

Former Harvard dean Archie C. Epps, III, was born on May 19, 1937, in Lake Charles, Louisiana. After graduating from high school, Epps attended Talladega College in Alabama where he earned his A.B. degree in 1958. Epps next attended the Harvard Divinity School, where he earned his bachelor's degree in theology and his certificate in educational management in 1961.

Epps began his professional career with Harvard the year he graduated, serving as a teaching assistant at the Center for Middle Eastern Studies. Politically active, Epps participated in a march on Washington in 1963, and would later be responsible for bringing Malcolm X, Ralph Ellison, and James Baldwin, to speak at Harvard; he edited a book in 1967 based on one of these guest appearances, The Speeches of Malcolm X at Harvard, which was reissued in 1991. In 1964, Epps was named assistant dean of Harvard, and six years later, he became the dean of students. During the turbulent 1960s and 1970s, Epps was often at the forefront of student activism, understanding the goals of both students and administrators. Epps was widely regarded by both sides of the debate as a keeper of the peace, though not all of his attempts were successful. During the 1980s and 1990s, Epps organized a series of conferences on economics, the result of which was a book, Present at the Creation: The Fortieth Anniversary of the Marshall Plan. Epps broke new ground again in 1992 by issuing Harvard's first handbook on race relations. Overcoming a series of health problems in 1995, Epps continued on at the university until his retirement in 2001.

A longtime member of Christ Church in Cambridge, Massachusetts, Epps was active with a number of other organizations as well. Epps also served as a trustee of the Boston Symphony Orchestra for twenty years; was an overseer of the Museum of Fine Arts in Boston; and was a trustee of several schools.

See how Archie C. Epps, III is related to other HistoryMakers
Click Here To Explore The Archive Today!