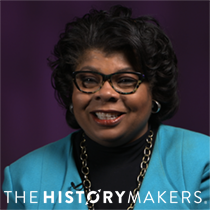 See how April Ryan is related to other HistoryMakers
Donate Now

Journalist and political analyst April Ryan was born on September 5, 1967 in Baltimore, Maryland to Robert C. Ryan, Sr. and Vivian Ryan. She majored in broadcast journalism at Morgan State University in Baltimore, Maryland and graduated with her B.S. degree in 1989. There, she worked at the university’s radio station, WEAA-FM, as a disc jockey.

After graduating, Ryan worked as a freelance writer for a number of television stations across the eastern United States. She returned to the Baltimore area in 1991, after landing a job as radio news announcer at V-103 (now WQSR). Ryan was soon promoted to news director, and also began freelancing for the American Urban Radio Networks (AURN). In 1997, Ryan was hired as an AURN position in the White House press corps and has reported on four United States presidential administrations. Ryan conducted one-on-one interviews with President William Jefferson Clinton, President George W. Bush, President Barack Obama, Secretary of State Condoleezza Rice, First Lady Laura Bush, Vice President Al Gore, South African President Thabo Mbeki, and Secretary of State John Kerry. In 2011, Ryan was elected to serve on the board of the White House Correspondence Association. Ryan’s first book, The Presidency in Black and White: My Up-Close View of Three Presidents and Race in America, was published in 2015 and won the NAACP Image Award. Her second book, At Mama’s Knee: Mothers and Race in Black and White, was published the following year. In 2017, Ryan became a political analyst with CNN. In 2018, Ryan published her third book, Under Fire: Reporting from the Front Lines of the Trump White House.

Ryan was a member of the National Press Club and has appeared on MSNBC, NBC, and News One. In 2004, Ryan was named an American Swiss Foundation Young Leader. In 2011, Politico named Ryan as one of the top 50 people in Washington D.C. to watch. Ryan won the Journalist of the Year Award from the National Association of Black Journalists in 2017. She was also awarded an honorary doctorate degree from Claflin University.

April Ryan was interviewed by TheHistoryMakers on October 31, 2017.

See how April Ryan is related to other HistoryMakers
Donate Now