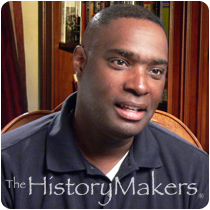 Screenwriter and author Antwone Quenton Fisher was born on August 3, 1959 in a women’s prison outside of Cleveland, Ohio to seventeen-year-old Eva Mae Fisher and twenty-three-year-old Edward Elkins. His mother named him for pianist Antoine “Fats” Domino, and his father was killed before he was born. As a result, Fisher grew up in several foster homes, without having known his parents. Twelve years of his childhood were spent with a foster family named the Picketts, a middle-aged couple whose children were already grown. During his time with the Picketts, Fisher was beaten physically, sexually abused by a neighbor and family friend, and emotionally neglected. For many years, his foster father did not even acknowledge whether he knew Fisher's name. After one fight with Mrs. Pickett, Fisher was kicked out of the home and forced to return to social services.

For high school, Fisher attended George Junior Republic School, a specialized school for young men from disadvantaged circumstances located in western Pennsylvania. While attending school, he met social worker Bill Ward, who was a significant and positive influence in Fisher’s life. When Fisher graduated, he moved into a Cleveland YMCA. Seeking protection for the numerous predators in the neighborhood, Fisher entered into the criminal world of Cleveland by collecting money from prostitutes for a local pimp named Butch. For the latter half of 1977, Fisher was homeless and slept wherever he could find some shelter, usually on the campus of Cleveland State University.

Fisher joined the United States Navy in 1978, where he spent eleven years in the service. He began to receive counseling from a Naval psychiatrist, Lieutenant Commander Williams. Williams helped motivate Fisher to discover his own origins. After his discharge from the Navy, Fisher became a federal corrections officer for the Federal Bureau of Prisons for three years. He then began working as a security guard for Sony Pictures, and resolved to discover the whereabouts of his biological family. After some research, Fisher contacted his aunt, Annette Elkins and was able to meet his biological family, including his mother, Eva Mae. In 1996, Fisher married his wife, LaNette Fisher, with whom he has two children.

In 2001, Fisher published his autobiography, Finding Fish. After this, Fisher fielded several competing offers for the film rights. After declining several offers, he ultimately sold the rights to his story to 20th Century Fox. Shortly thereafter, the film Antwone Fisher was released with actor Derek Luke portraying the title character. The film was directed by Denzel Washington, who portrayed Commander Williams. Fisher’s other writing credits include work on the films Money Talks, Rush Hour and ATL. In 2005, Fisher released a book of his own poetry entitled Who Will Cry for the Little Boy?