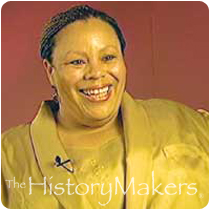 See how Antoinette Malveaux is related to other HistoryMakers
Donate Now

Born March 19, 1958, in San Francisco, California, Antoinette Malveaux has spent most of her career helping others. The youngest of five children, Malveaux attended public schools in San Francisco. In 1981, she graduated with a B.A. in economics from the University of San Francisco. As part of the management track, she worked in the financial analysis and management division, specializing in international markets.
In 1985, Malveaux earned an M.B.A. from the Wharton School of Business at the University of Pennsylvania and was hired by American Express Bank as director of global marketing and strategic planning.

Malveaux left American Express in 1991 to assume the position of director of operations for the National Black M.B.A. Association. From there, she was named executive director in 1993 and was then promoted to president and CEO. Under her leadership, the National Black M.B.A. Association developed into a multinational organization and its membership tripled. She left the group in 2003 to pursue other interests, including traveling through Europe.

Malveaux is actively involved in the community, serving on the Board of Trustees of the University of San Francisco; the Better Business Bureau; and the Girl Scouts USA, Chicago chapter. She has been listed in Who's Who in American Business; received the Rainbow/PUSH Reginald Lewis Trailblazer Award and served on the Council on Graduate Minority Education.

See how Antoinette Malveaux is related to other HistoryMakers
Donate Now
Click Here To Explore The Archive Today!