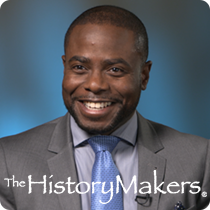 See how Anthony McGill is related to other HistoryMakers

Classical musician Anthony McGill was born on July 17, 1979 in Chicago, Illinois to Ira Carol and Demarre McGill. He attended Whitney M. Young Magnet High School and took clarinet lessons at Chicago’s Merit School of Music. McGill also attended the prestigious Interlochen Arts Camp in Interlochen, Michigan, and was a member of the Chicago Youth Symphony Orchestra. McGill went on to earn his B.M. degree in the clarinet from Curtis Institute of Music in Philadelphia, Pennsylvania in 2000.

Before graduating from Curtis Institute, McGill was appointed as associate principal clarinetist in the Cincinnati Symphony Orchestra in Cincinnati, Ohio. He was also a recipient of the Avery Fisher Career Grant in 2000. After four years with the Cincinnati Symphony Orchestra, McGill was appointed principal clarinetist of the Metropolitan Opera in New York City. In 2009, McGill played alongside cellist Yo-Yo Ma, violinist Itzhak Perlman, and pianist Gabriela Montera at President Barack Obama’s inauguration, performing John Williams’ Air and Simple Gifts. The following year, McGill released his first album Anthony McGill. In 2011, he joined the faculty at The Juilliard School in New York City. He was an inaugural recipient of the Sphinx Medal of Excellence, awarded annually to classically-trained artists of color by the Sphinx Organization. In 2014, McGill recorded Mozart & Brahams: Clarinet Quintets with The Pacifica Quartet. The album was his first to be commercially released as a soloist. Following a decade with the Metropolitan Opera, McGill was appointed principal clarinetist of the New York Philharmonic in 2014, making McGill the first African American principal in the organization’s entire history. In 2015, McGill became an artist-in-residence for WQXR, the nation’s most-listened-to classical music station.

McGill appeared as a soloist with numerous quartets and orchestras, including the Baltimore Symphony, the New Jersey Symphony, the Curtis Orchestra, and the Chicago Sinfonietta. He also participated in classical and chamber music festivals nationwide, such as the Marlboro Music Festival, the Sarasota Music Festival, and the Tanglewood Music Festival. With his twin brother, classical flutist Demarre L. McGill, he performed on NBC Nightly News, the Steve Harvey Show, Today, and on MSNBC with Melissa Harris-Perry. McGill served on the faculty at the Peabody Institute of Johns Hopkins University, Bard College Conservatory of Music and Manhattan School of Music.

Anthony McGill was interviewed by The HistoryMakers on December 2, 2016.

See how Anthony McGill is related to other HistoryMakers
Click Here To Explore The Archive Today!