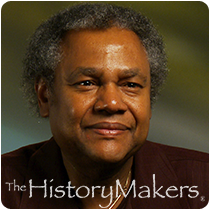 See how Anthony Johnson is related to other HistoryMakers
Donate Now

Physicist Anthony M. Johnson was born on May 23, 1954 in Brooklyn, New York to James W. Johnson and Helen Y. Johnson. He initially wanted to study math or chemistry in college until a teacher at Samuel J. Tilden High School in Brooklyn, New York introduced him to physics. Johnson attended the Polytechnic Institute of New York where he graduated magna cum laude with his B.S. degree in physics in 1975. He went on to earn his Ph.D. degree in physics from the City College of New York in 1981. Johnson conducted his thesis research at Bell Laboratories in Murray Hill, New Jersey with support from the Bell Labs Cooperative Research Fellowship Program.

Upon graduation, Johnson was hired at Bell Laboratories in Holmdel, New Jersey as a member of the technical staff in the Quantum Physics and Electronics Research Department. In 1988, Johnson was promoted as a distinguished member of Bell Labs technical staff; and, in 1990, he became part of the Photonic Circuits Research Department. Johnson joined the faculty of the New Jersey Institute of Technology in 1995 where he served as chairperson, distinguished professor of applied physics, and professor of electrical and computer engineering. In 2003, Johnson was named as Director of the Center for Advanced Studies in Photonics Research (CASPR). He was then appointed as professor of physics, computer science, and electrical engineering at the University of Maryland-Baltimore County (UMBC) where his research focused on ultrafast optics and optoelectronics.

Johnson has authored two book chapters, over seventy scholarly articles, and he has been credited with four U.S. Patents. In addition, he served as Editor-in-Chief of the journal Optics Letters from 1995 to 2001. Between 1991 and 2000, Johnson was elected as a Fellow into several academic and professional organizations, including the Optical Society of America (OSA), the American Physical Society (APS), the American Association for the Advancement of Science (AAAS), and the Institute of Electrical and Electronics Engineers (IEEE). He was a 1992 Charter Fellow of the National Society of Black Physicists (NSBP). In 1993, Johnson received the Distinguished Alumnus Award from the Polytechnic University; and, in 1994, he was honored with the Black Engineer of the Year Special Recognition Award. The American Physical Society presented Johnson with the Edward A. Bouchet Award in 1996. In 2002, Johnson became the first African American to serve as president of the Optical Society of America.

Anthony M. Johnson was interviewed by The HistoryMakers on May 24, 201

See how Anthony Johnson is related to other HistoryMakers
Donate Now
Click Here To Explore The Archive Today!