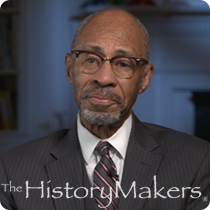 See how Anthony Jackson is related to other HistoryMakers

Jackson was invited to training camp for the San Francisco 49er’s football team, but was cut from the team and enrolled in graduate school. While there, Jackson helped establish the National Black MBA Association and helped organize the first annual conference in Chicago, Illinois that included twenty-six schools, two representatives from each school, area business persons, university deans and academic administrators. Jackson also worked with the Breadbasket Commercial Association, Inc. that helped support local black businesses in Chicago, Illinois, and co-founded an accounting practice with James Hill, Jr. After earning his Ph.D. degree, Jackson became a professor of accounting at Miami University in Oxford, Ohio and remained for three years until he accepted a position at Central State University in Wilberforce, Ohio, where he served as chair of the accounting department. He also held faculty positions at Ball State University in Muncie, Indiana; Loyola University in Chicago, Illinois; and Virginia State University in Petersburg, Virginia. In 1998, Jackson secured a teaching position at Hampton University in Hampton, Virginia, where he remained until his retirement in 2005.

Anthony Jackson was interviewed by The HistoryMakers on June 15, 2017.

See how Anthony Jackson is related to other HistoryMakers
Click Here To Explore The Archive Today!