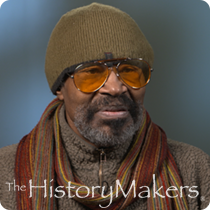 See how Anthony Chisholm is related to other HistoryMakers
Donate Now

Actor Anthony Chisholm was born on April 9, 1943 in Cleveland, Ohio to Edith Amilia and Victor Chisholm. Drafted by the U.S. Army, Chisholm served as platoon leader for the 4th Armored Calvary, 1st Infantry Division in the Vietnam War.

Upon returning from the Vietnam War, Chisholm performed in The Boys from Syracuse and The Threepenny Opera at Karamu House in Cleveland, Ohio. In 1968, he made his film debut in Uptight, directed by Jules Dassin. That same year, Chisholm began studying with Lloyd Richards in the Negro Ensemble Company’s master class. Chisholm appeared in a number of films in the late 1960s and early 1970s, including Putney Swope in 1969 and Cotton Comes to Harlem in 1970. In 1985, he portrayed Habu and Drill Sergeant Williams in Tracers at the Joseph Papp Public Theater in New York City. In 1987, Chisholm’s Vietnam War experiences served as the inspiration for the HBO television series Vietnam War Story. He also joined the Vietnam Veterans Ensemble Theater Company, where he acted in several productions including Back in the World in 1988 and The Strike in 1990. Chisholm met August Wilson in 1990 while auditioning for Two Trains Running, and was cast in the role of Wolf. After appearing in the first run at Yale Repertory Theatre, he went on tour with the production to Boston’s Huntington Theatre, Seattle Repertory Theatre, Los Angeles’ Doolittle Theatre, the Kennedy Center, and San Diego’s Old Globe Theatre. Chisholm reprised the role in the Broadway production of Two Trains Running at the Walter Kerr Theatre in New York City in 1992. In 1996, he became part of the core cast for August Wilson’s Jitney, which appeared off-Broadway at New York City’s Second Stage Theatre in 2000. Between 2001 and 2003, Chisholm portrayed prisoner Burr Redding in the HBO crime drama series, Oz. He then acted in August Wilson’s Gem of the Ocean in 2004, alongside Phylicia Rashad, Ruben Santiago-Hudson and John Earl Jelks. Beginning in 2007, Chisholm portrayed Elder Joseph Barlow in the final installment of August Wilson’s “Pittsburgh Cycle,” Radio Golf. He received a Tony Award nomination for his portrayal of Elder Joseph Barlow in the Broadway production of Radio Golf, directed by Kenny Leon at the Cort Theatre in New York City.

In addition to his stage roles, Chisholm appeared in numerous television shows and films, including Reign Over Me (2007), Premium Rush (2012) and Spike Lee’s Chi-Raq (2015). He was the recipient of the Drama Desk, Obie, Ovation, NAACP Theatre, and AUDELCO awards.

See how Anthony Chisholm is related to other HistoryMakers
Donate Now