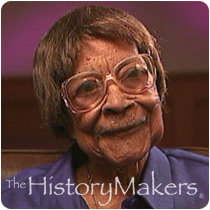 See how Annie Rosetta "Rose" Hall is related to other HistoryMakers

Annie Rosetta "Rose" Hall was born in 1897 in Hardwick, Georgia. She was the fourth of five children born to Mary and Milus Hall. Her father died while the children were still young, so her mother worked to take care of them. Living through the Depression, Hall remembers hard times. To make ends meet, Hall's mother took in washing and ironing. Although times were rough, Hall's mother insisted that each of her children be educated. All went to college or trade school.

An aunt helped put Hall through Snow Hill Institute in Alabama and the Forsyth Agricultural and Mechanical State School, where she received her teaching certificate. For fourteen years, Hall taught in schools throughout Baldwin County, Georgia and Sparta, Georgia. At each school that she taught in, she was given room and board, so she was only able to go home to see her family for one weekend a month. She would go home on a Friday and her brothers would drive her back on Sunday. Missing her family, Hall moved back home to take a janitorial job in the Hardwick post office, where she worked for thirty-five years. In 1970, she retired at the age of 81. Living with her younger sister, Frances Smothers, in the same house that they were born, Hall spent years taking care of her sister, who was confined to her bed with arthritis. Hall's sister died at the age of 94 in 1998.

Although Hall never married or had children, she adopted people to love along the way. She has fond memories of her family growing up and has plenty of family from offspring of her other siblings, all of whom she calls her "children."

See how Annie Rosetta "Rose" Hall is related to other HistoryMakers
Click Here To Explore The Archive Today!