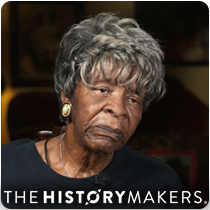 "Service is the rent you pay to live on this earth."

Educator and civic activist Annie Abrams was born on September 25, 1931 in Arkadelphia, Arkansas to Queen Victoria Annie Katharine Reed. Abrams attended the Peake School in Arkadelphia until she was thirteen years old. Then, she transferred to Dunbar High School in Little Rock, Arkansas in 1944. Abrams graduated from Dunbar High School in 1950 and earned her certification in education from Dunbar Junior College in Marianna, Arkansas in 1952. Abrams earned her B.A. degree in special education from Philander Smith College in 1962.

In 1956, Abrams accepted a position with the Arkansas Teachers Association (ATA). Through her work with the ATA, Abrams became involved in the desegregation of Little Rock Central High School, working alongside Daisy Bates. She campaigned to rename streets in Little Rock after both Daisy Bates and Little Rock Mayor Charles Bussey. Abrams also led a campaign to rename High Street in honor of Reverend Dr. Martin Luther King, Jr. and established Little Rock’s Martin Luther King, Jr. parade. In 1978, she represented the Young Women’s Christian Association at a United Nations conference in Geneva, Switzerland.

In 2010, Abrams was inducted into the Arkansas Black Hall of Fame. She was also awarded an honorary doctorate degree and a Community Service Award from Philander Smith College. Abrams was the recipient of the Brooks Hays Award for Civil Rights Champions and the Making of the Martin Luther King, Jr. Holiday Award.


Annie Abrams was interviewed by The HistoryMakers on September 18, 2017.