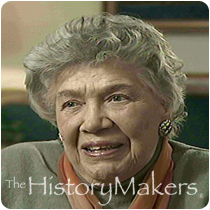 See how Anne Brown is related to other HistoryMakers
Donate Now

Soprano legend Anne Wiggins Brown was the first person to play the leading role of “Bess” in the production of Porgy and Bess on Broadway. Brown was born on August 9, 1912, in Baltimore, Maryland. Her father, Harry Brown, was a prominent physician and a grandson of a slave. Her mother, Mary Allen Wiggins, descended from a family of singers and studied voice and piano in New York. Brown was named after her paternal grandmother, Annie E. Brown, a gifted singer and evangelist who toured the southeastern United States spreading the gospel. Her maternal grandfather, William Henry Wiggins, was known for his lyric tenor voice. Brown and her three sisters lived in a segregated community, where their mother tutored them in piano and involved the sisters in music and theatre. At twelve years old, Brown attended Frederick Douglass High School which had a superb music program. She studied music with W. Llewellyn Wilson. After graduating from Frederick Douglass High School, Brown auditioned for the Juilliard School and became the first African American to win the prestigious Margaret McGill Scholarship. Brown was sixteen years old when she began studying with Lucia Dunham at Juilliard.

Brown’s scholarship drew the attention of George Gershwin who was seeking singers for his new opera, then called simply Porgy. After auditioning for him, singing the spiritual City of Heaven without accompaniment, he awarded her the part of “Bess”. The two worked closely on the opera, rewriting the third act to have her sing Summertime and even changing the opera’s title to Porgy and Bess, reflecting the importance of her role. On October 10, 1935, Porgy and Bess premiered at New York’s Alvin Theater, with Brown as its first “Bess”. Brown went on to appear in the Broadway play Mamba’s Daughters and in the film Rhapsody in Blue. She reprised her role as “Bess” in various revivals of Porgy and Bess and between 1942 and 1948, and achieved celebrated performances as a concert artist at Carnegie Hall and with the Los Angeles Philharmonic.

In 1948, Brown settled in Oslo, Norway, where she met and married Norwegian Olympic ski jumper, Thorleif Schjelderup. Until the early 1950s, she worked as a professional musician on productions like Menotti’s The Medium and The Telephone. However, during a European tour in 1953, she was diagnosed with asthma, which ended her singing career. After this, Brown worked several years as a music teacher. Among her students were actress Liv Ullmann, jazz singer Karin Krog and folk singer Ase Kleveland. She also staged several operas in France and Norway. In 2000, Brown was awarded Norway’s Council of Cultures Honorary Award.

See how Anne Brown is related to other HistoryMakers
Donate Now
Click Here To Explore The Archive Today!