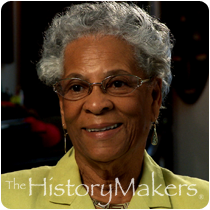 Favorite Color:
Pink
Favorite Food:
Chicken
Favorite Time of Year:
Spring
Favorite Vacation Spot:
Anywhere Near Water
Favorite Quote:
Do Unto Others As You Would Have Them Do Unto You.

Favorite Color:
Pink
Favorite Food:
Chicken
Favorite Time of Year:
Spring
Favorite Vacation Spot:
Anywhere Near Water
Favorite Quote:
Do Unto Others As You Would Have Them Do Unto You.

See how Ann Walker is related to other HistoryMakers

Civil rights activist Ann Walker was born in Freehold, New Jersey, on February 27th, 1928. Her mother, Mabel B. Edwards, was a seamstress, and her father, Robert Willard Edwards, worked in the trust department at Howard Savings. She attended Jefferson Junior High and Court Street School before Freehold High School in Freehold, New Jersey. For two years after her high school graduation in 1946, Walker attended Virginia Union University in Richmond, Virginia. In 1950, she married Dr. Wyatt Tee Walker, who would later serve as Chief of Staff for Dr. Martin Luther King, Jr. and as executive director of the Southern Christian Leadership Conference (SCLC) from 1960 to 1964. In 1951, Walker graduated from Howard University with her B.S. degree in accounting and economics, and one year later, her first child, Ann Patrice, was born. In the next five years, Walker would have three more children.

During the 1960s, Walker and her husband were very active in the Civil Rights Movement. In 1961, they participated in the Freedom Rides, for which Walker would spend a week in jail in Jackson County, Mississippi. Two years later, in 1963, during Martin Luther King Jr.’s campaign to desegregate Birmingham, Walker was beaten on Mother’s day at the Gaston Motel by the National Guard.

In the 1970s, the Walkers lived in New York, where for thirty-seven years her husband, Dr. Walker, was Senior Pastor at Canaan Baptist Church of Christ in Harlem. During this time, Walker volunteered with the Westchester Foster Grandparents, serving one-on-one as a tutor and mentor to young people. She also served as board president for two terms at the Yonkers YWCA and as Mayor’s Liaison to the Black Community in Yonkers. In 1975, after raising her children, Walker entered the workforce at North American Philips as the Branch Director of their credit union. She retired in 1989, and in 2004, when her husband also retired, the Walkers moved to Chester, Virginia.

Ann Walker was interviewed by The HistoryMakers on June 22, 2010.

See how Ann Walker is related to other HistoryMakers
Click Here To Explore The Archive Today!