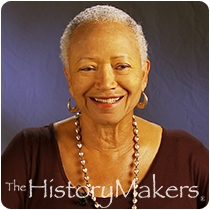 See how Ann Smith is related to other HistoryMakers

Civic leader Ann E. Smith was born in Jefferson City, Missouri in 1939 where she attended segregated schools. Her grandfather served with the United States Colored Troop regiment during the American Civil War and then graduated from Fisk University. Smith’s father, a principal, and her mother, a high school, pushed her to do well academically and athletically. During high school, she played softball and volleyball. Smith went on to receive her B.A. degree from Lincoln University in Jefferson City, Missouri; her M.A. degree from the University of Iowa; and her Ph.D. degree from the Union Institute and Union University in Cincinnati, Ohio.

Smith began her dynamic career with sixteen years of service in academia. She taught high school in her native State of Missouri and then assumed teaching posts at Eastern Illinois University where she became the first African American appointed as a full-time professor. Smith went on to work at the University of Indiana and then Northeastern Illinois University. While there, she progressed through the ranks from instructor, assistant and associate professor to Assistant to the President and Vice President for Academic Affairs. In 1978, Smith transitioned from academia to business and joined Prudential Insurance Company. After earning several performance awards in her first year as an agent, she was promoted to sales manager. In 1981, she became director of marketing for Cook, Stratton & Company, an insurance brokerage firm. In 1986, she assumed a full time role as vice president of Endow, Inc., an insurance planning and consulting firm she had co-founded seven years earlier. Smith began serving a six-year term on the Board of Trustees of the University of Illinois in 1985, thus becoming the first black woman to hold office in Illinois through a statewide election. After serving almost four years, she resigned in July of 1988 to be considered for the position of Associate Chancellor at the University of Illinois at Chicago (UIC), and accepted the appointment in September of 1988. Later, Smith served as director of Community Relations at UIC at the University of Illinois at Chicago, and then became President of the Gamaliel Foundation until retiring in 2011.

Anne E. Smith was interviewed by The HistoryMakers on August 21, 2013.

See how Ann Smith is related to other HistoryMakers