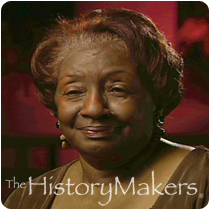 See how Ann Marie Williams is related to other HistoryMakers

Ann Marie Williams was born Annie Marie Ferrell on October 21, 1937, to Lloyd and Izora Ferrell in Coolidge, Texas, in the Sandy Community of Limestone County. She attended the Sandy Community School, Phyllis Wheatley Elementary School in Hubbard, Texas, St. Anthony’s Catholic School, and Lincoln High School in Dallas, Texas, where she graduated in 1955. She was first exposed to the arts in high school. The field trips to the opera, symphony and ballet provided exposure to dance as a profession, and she also took private dance lessons at the YWCA in Dallas.

Williams attended Prairie View A&M University where she received her early training from Barbara Hollis, who was a member of the Katherine Dunham Dance Company. After receiving a degree in health and physical education in 1960 from Prairie View A&M University, she traveled to New York City to study under Arthur Mitchell. Williams, then, returned to Dallas as a dance teacher for the Dallas School System where she met and married her husband, Nathaniel Williams, in 1963. She took additional dance instruction under Edith James, Martha Graham, Doris Humphrey, Charles Weidman and Alvin Ailey. In 1968, Williams was the first African American woman to receive a M.A. degree in dance from Texas Women’s University. She also holds a certificate in arts management from Texas A&M University. Williams was hired to head up the first dance department at Bishop College in Dallas, where she received a $1 million grant to fund the program. She formed the Dallas Black Dance Academy to teach children who no longer had a place to take dance lessons after the funding for continuing education ended at Bishop College. At the coaxing of her staff, Williams also started a dance company. As the popularity of the dance company escalated, in 1976, the Dallas Black Dance Theater was born.

Williams serves on the Board of Directors of the Dallas Opera, Arts District Foundation, TAPER, Dallas Dance Council, the Texas Women’s University Alumnae, Dance USA and the International Association of Blacks in Dance. She has received a number of awards and honors for her support and commitment to the arts. The Dallas Black Dance Theater was commissioned to perform during the 1996 Olympics.

Williams lives in Dallas with her husband of forty-three years, Nathaniel Williams. They are the parents of Angelia Williams, a graduate of Florida A&M University School of Business and Industry.

See how Ann Marie Williams is related to other HistoryMakers
Click Here To Explore The Archive Today!