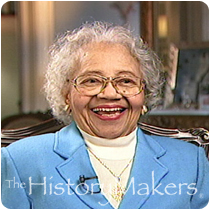 See how Ann Cooper is related to other HistoryMakers

Ann Louise Nixon Cooper was born on January 9, 1902 in Shelbyville, Tennessee and attended school in that rural community. After the death of their mother, she and her six siblings were separated, and an aunt raised Ann. In 1922, Ann Nixon married Albert Berry Cooper, a young dentist in Nashville, Tennessee. Soon after, the Coopers moved to Atlanta, Georgia, where Dr. Cooper established a highly successful dental practice, and the young couple started their family of four children. Cooper served as a homemaker for most of her life, working briefly in 1923 as a policy writer for the Atlanta Life Insurance Company, which had been established in 1905 by African American barber Alonzo Herndon.

Cooper was a vibrant member of Atlanta’s African American elite for more than eighty years. During the first half of the 20th century, she and her husband counted as friends or acquaintances such luminaries as educators W.E.B. Du Bois, Lugenia Burns Hope and John Hope Franklin, Benjamin E. Mays and E. Franklin Frazier. She was an adult eyewitness to life in Georgia during two world wars, the Great Depression, and the efforts of whites to maintain segregation.

Cooper has worked to improve conditions in the African American community for much of her adult life. For more than fifty years, she has served on the board of directors of the Gate City Nursery Association. She was a founder of a Girls Club for African American youth in Atlanta, and in the 1970s, she taught people to read in a tutoring program at the historic Ebenezer Baptist Church.

In 1980, Cooper received a community service award for her activism from Atlanta’s WXIA-TV. In 2002, she was awarded the Annie L. McPheeters Medallion for community service from the Auburn Avenue Research Library on African American Culture and History.

The centenarian was the oldest living member of the Atlanta Chapter of the Links, Inc. and had been a member of the Utopian Literary Club since 1948.

Cooper was interviewed by The HistoryMakers on March 24, 2004.

See how Ann Cooper is related to other HistoryMakers
Click Here To Explore The Archive Today!