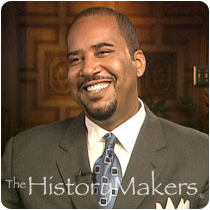 See how Angelo Henderson is related to other HistoryMakers
Donate Now

After graduating from the University of Kentucky in Lexington with a degree in Journalism, Angelo Henderson first got a job in 1995 working for the St. Petersburg Times in St. Petersburg, Florida. He worked as a beat reporter and a business writer. He then moved on to the Louisville Courier-Journal where he continued to cover business before joining the staff of the Wall Street Journal's Detroit Bureau.

His first assignment at the Wall Street Journal was reporting on U.S. operations of non-American car companies. Eighteen months later, he moved to covering the Chrysler Corporation, writing on everything from labor talks to new car models. In 1997, he was appointed deputy Detroit Bureau Chief. This position called on him to write stories and manage reporters. In 1999, Henderson began writing exclusively for Page One of the Wall Street Journal. That year, he was awarded the Pulitzer Prize for distinguished feature writing. His prize-winning story, "Crime Scene", detailed the lives affected by an attempted drug store robbery that ended in the robber's death. In 2001, he joined The Detroit News as the special projects reporter. He travels the United States reporting on race, crime, and urban issues, giving a voice to many who have become voiceless.

Henderson was the recipient of several other journalism awards including the Detroit Press Club Award, the Unity Award for Excellence in minority reporting for Public Affairs/Social Issues, and the National Association of Black Journalists Award for outstanding coverage of the black condition. He served two terms as the parliamentarian of the National Association of Black Journalists. Henderson also serves as a deacon at Hartford Memorial Baptist Church and is a member of the gospel group Marc Ivory and the Excelled Praise Singers. He and his wife, Felecia, and their son, Angelo, resided in Pontiac, Michigan.

See how Angelo Henderson is related to other HistoryMakers
Donate Now
Click Here To Explore The Archive Today!