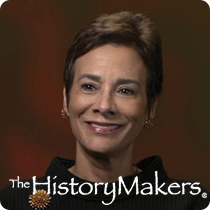 See how Angela Vallot is related to other HistoryMakers
Donate Now

Lawyer and corporate executive Angela Vallot was born on November 8, 1956 in Abbeville, Louisiana, to Irene Porche, a homemaker, and Peter Vallot, a teacher and entrepreneur. Vallot attended Mills College in Oakland, California, earning her B.A. degree in government in 1977. She went on to study at Georgetown University Law Center in Washington D.C., where she obtained her J.D. degree in 1980, after interning for E.I. du Pont de Nemours and Company, as well as for U.S. Representative Pete Stark, Jr.

In 1985, Vallot joined the law firm of Jones Day in Washington, D.C. as an associate attorney. She was hired as counsel to the law firm of Arent Fox Kintner Plotkin & Kahn in 1990, where she served until 1997. During that time, Vallot also served on President Bill Clinton’s 1992 presidential transition team, as acting director of the Office of White House Liaison. After serving as director of stakeholder relations, Vallot was hired in 1997 by Texaco, Inc. to serve as the company’s first chief diversity officer, following the settlement of a $176 million racial discrimination lawsuit. During her tenure, she created and managed Texaco’s Office of Corporate Diversity Initiatives, chaired its Corporate Diversity Council, and managed the work of six regional Diversity Councils. Vallot also worked closely with the 7 member court-appointed Task Force on Equality and Fairness, and developed the company’s partnerships with civil rights organizations such as the NAACP and National Urban League. From 2001 to 2003, Vallot served in the position of chief diversity officer at Colgate-Palmolive, before leaving to found her own management consulting company, Vallot Consultants. The firm was renamed VallotKarp Consulting with the addition of her business partner, Mitchell Karp. Vallot has toured frequently as a public speaker and panelist on topics related to diversity and inclusion, women’s issues and career development.

Vallot and her husband, James Basker, have two daughters, Anne and Katherine.

Angela Vallot was interviewed by The HistoryMakers on December 15, 2016.

See how Angela Vallot is related to other HistoryMakers
Donate Now
Click Here To Explore The Archive Today!