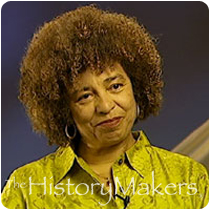 See how Angela Davis is related to other HistoryMakers
Donate Now

Activist, author, and professor, Angela Davis was born in Birmingham, Alabama, on January 26, 1944, the daughter of two teachers. Active at an early age in the Black Panthers and the Communist Party, Davis also formed an interracial study group and volunteered for the Student Nonviolent Coordinating Committee while still in high school. At fifteen, after earning a scholarship, Davis traveled to New York to complete high school. In 1960, Davis traveled to Germany to study for two years, and then to the University of Paris for another year. After returning to the United States, Davis attended Brandeis University, where she graduated magna cum laude in 1965. Davis then returned to Germany for further study before enrolling in the University of California, San Diego, where she earned her M.A. degree in 1968.

Upon earning her master's degree, Davis became an assistant professor at UCSD, but due to her connections with the Panthers and the Communist Party, she was removed a year later. Following her dismissal, Davis worked to free the Soledad Prison Brothers and befriended an inmate, George Jackson. In August of 1970, Jackson and several other inmates attempted to escape from the Marin County Courthouse, and a judge and three others were killed. Davis was quickly put on the FBI's most wanted list, despite the fact that she was not at the crime scene, and was apprehended in New York. After spending eighteen months in jail during her trial, Davis was acquitted in 1972. While in prison, Davis wrote her first book, If They Come in the Morning: Voices of Resistance, entirely by hand. After her acquittal, Governor Ronald Reagan vowed she would never teach in California again, but nevertheless, she was immediately hired by San Francisco State University, where she stayed for another twelve years. Entering the political ring, Davis ran on the Communist Party ticket as vice president in 1980 and 1984. When the Soviet Union began to fall apart, however, Davis gave up communism. Davis continued to teach in the History of Consciousness Department at the University of California, Santa Cruz.

Davis toured across the United States and the world lecturing on prison reform, and served on the advisory board of the Prison Activist Resource Center. Davis also co-founded the Committees of Correspondence, an organization that seeks to unite all socialist groups in the United States.

See how Angela Davis is related to other HistoryMakers
Donate Now
Click Here To Explore The Archive Today!