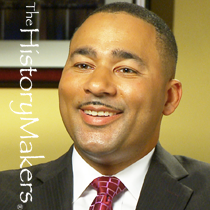 See how Andrew Humphrey is related to other HistoryMakers

Meteorologist Andrew Humphrey was born in Silver Spring, Maryland. As a child, he loved sports, math and science. His early fascination with weather caused him to earn his B.S.E. in meteorology from the University of Michigan in Ann, Arbor in 1992. He then went on to receive his M.S. degree in meteorology in February 1995 from the Massachusetts Institute of Technology (MIT) in Cambridge, Massachusetts. Under the supervision of Dr. Kerry A. Emanuel, his masters’ thesis entitled “The Behavior of the Total Mass of the Atmosphere” examined a one hundred year behavior period (1890-1990) of the total mass of the atmosphere. He concluded that the total atmospheric mass decreased over this time period.

In 1995, he started his career as a meteorologist at the local NBC affiliate WRC-TV in Washington, D.C. He also worked in Maryland as a research scientist with the Biosphere and Planetary Sciences branches of NASA Goddard Space Flight Center and at the National Oceanic Atmospheric Administration’s National Center for Environmental Protection. In 1996, he worked for NBC and CNBC Europe covering weather throughout Europe and North Africa. In 2000, he joined local Fox affiliate WUPW-TV in Toledo, Ohio as their chief meteorologist and served as a freelance meteorologist for CNN and CNNI in Atlanta, Georgia. In 2002, he became a meteorologist and reporter for WDIV-TV (NBC) in Detroit.

In addition to his work in meteorology, Humphrey holds numerous awards and distinctions. He received the Community Service Award from the National Association for Black Journalists (NABJ) in 2000. The Detroit City Council awarded him with the 2006 Spirit of Detroit Award for his community service. In 2009, he won an Emmy for weather anchoring from the Michigan Chapter of the National Chapter of the National Academy of Television Arts and Sciences. While at WDIV (NBC) in Detroit, he received the American Meteorological Society (AMS) Certified Broadcast Meteorologist distinction. Humphrey also earned certification in Motion Picture Production by the Motion Picture Institute of Michigan.

He was the founder and co-chairs the Digital Journalism Task Force of the National Association of Black Journalists (NABJ); is Past President of NABJ’s Detroit chapter and Board Member of FIRST (Robotics) in Michigan and the Detroit Science Center; and was an active leader and team member of the Alumni Association of the University of Michigan’s Alumni Leadership Council, the Charles H. Wright African American History Museum and Cranbrook Institute of Science.

Andrew Humphrey was interviewed by The HistoryMakers on October 25, 2012.

See how Andrew Humphrey is related to other HistoryMakers
Click Here To Explore The Archive Today!