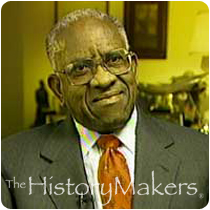 See how Andrew F. Brimmer is related to other HistoryMakers

Economist, academic and business leader Andrew F. Brimmer was born in Newellton, Louisiana, on September 13, 1926. The son of sharecroppers who had been driven off of the land by boll weevils, Brimmer attended local racially segregated elementary and high schools. Upon graduation, Brimmer moved to Bremerton, Washington, with an older sister and worked in a navy yard as an electrician's helper. In 1945, Brimmer was drafted into the Army, where he served until November 1946. After completing his military service, Brimmer enrolled in the University of Washington, where he earned his B.A. degree in economics in 1950. In 1951, after receiving his M.A. degree, Brimmer won a Fulbright grant to study in India. In 1952, Brimmer enrolled in Harvard, where he earned his Ph.D. in 1957.

See how Andrew F. Brimmer is related to other HistoryMakers
Click Here To Explore The Archive Today!