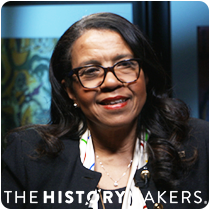 Favorite Color:
Red
Favorite Food:
Red Beans & Rice
Favorite Time of Year:
Spring
Favorite Vacation Spot:
I like to Travel and See New Places.
Favorite Quote:
There But for the Grace of God Go I.

Favorite Color:
Red
Favorite Food:
Red Beans & Rice
Favorite Time of Year:
Spring
Favorite Vacation Spot:
I like to Travel and See New Places.
Favorite Quote:
There But for the Grace of God Go I.

See how Andrea Young is related to other HistoryMakers
Donate Now

Civic leader Andrea Young was born on August 3, 1955 in Thomasville, Georgia to Andrew Young, Jr. and Jean Childs Young. She attended Trinity Elementary School in Atlanta, and received her B.A. degree in history and philosophy in 1976 from Swarthmore College in Swarthmore, Pennsylvania. In 1979, Young obtained her J.D. degree in law from Georgetown University Law Center, in Washington, D.C.

Young served as a legislative assistant to U.S. Senator Edward Kennedy from 1982-1985 where she worked on the Martin Luther King Holiday legislation and Kennedy's visit to South Africa on South Africa sanctions legislation in 1984. Young then worked for the United Church of Christ before returning to Capitol Hill in 1993 to serve as chief of staff for Cynthia McKinney, the first woman elected to represent Georgia in the U.S. Congress. Serving in this role for two years, Young managed more than twenty legislative and field staff in four offices, wrote and edited speeches, and monitored fundraising and compliance with the campaign finance and ethics regulations. In 1999, Young was named vice president of the National Black Child Development Institute in Washington, D.C. She served in this role for more than six years and led a school readiness initiative funded by the Kellogg Foundation as well as a campaign for universal pre-kindergarten. From there, in 2006, Young served as a senior program officer for the Southern Education Foundation where she worked to improve pre-kindergarten across the South and to foster collaboration among Latino and African American communities on issues of educational equity and excellence. In 2007, she became the founding executive director of the Andrew Young Foundation where her efforts focused on philanthropy and leadership training both nationally and internationally.

Young served as a Morehouse College scholar in residence in 2010, a Georgia State University Andrew Young School of Policy Studies adjunct professor in 2013, and a professor of practice in 2015. Young was named executive director of the American Civil Liberties Union of Georgia in 2017.

She was a co-author of Andrew Young and the Making of Modern Atlanta, and author of Life Lessons My Mother Taught Me. She collaborated with her father, Ambassador Andrew Young in writing his memoir An Easy Burden: Civil Rights and the Transformation of America.

Young has one child, Taylor Stanley Iyoho, with the late A. Knighton Stanley, and one grandchild. She is married to the attorney and art consultant, Jerry Thomas.

Andrea Young was interviewed by The HistoryMakers on March 9, 2018.

See how Andrea Young is related to other HistoryMakers
Donate Now