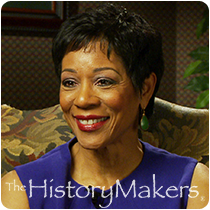 See how Andrea Roane is related to other HistoryMakers
Donate Now

Broadcast journalist Andrea Roane was born on October 5, 1949 in New Orleans, Louisiana to Frederic and Ethel Roane. She attended the Holy Ghost Elementary School, and graduated from the Xavier University Preparatory School in New Orleans. Roane went on to receive her B.A. degree in secondary education in 1971, and her M.A. degree in drama and communications in 1973, both from LSU - New Orleans, now the University of New Orleans.

From 1971 to 1974, Roane worked as a middle school and high school English teacher. She was also coordinator of cultural services for the New Orleans Parish Public Schools, and served as an administrator and principal of the New Orleans Center for Creative Arts. In 1975, Roane was hired as an education reporter for the New Orleans public television station WYES, where she also hosted a weekly magazine show and was the station's project director of a federally funded education show. Roane then worked for WWL-TV, a CBS affiliate, as an education reporter from 1976 until 1978. She returned to WYES for one year, and, in 1979, was hired as a host and correspondent for WETA public broadcasting station. Then, in 1981, Roane was hired as the Sunday evening and weekday morning anchor for WUSA Channel 9 in Washington, D.C., where she went on to serve in a number of news anchor roles. In 1993, she initiated an innovative Washington, D.C. breast cancer awareness program called Buddy Check 9.

Roane has served as co-chair of the Kennedy Center Community and Friends Board; as a member of the Capital Breast Care Center Community Advisory Council; and as a trustee of the National Museum of Women In The Arts. She is also a sustaining director of the Prevent Cancer Foundation. She served on the Georgetown Lombardi Cancer Center Health Disparities Initiative Community Advisory Board; the National Catholic Education Association Board; and served as a trustee of the Catholic University of America. Roane is also a Dame of the Sovereign Military Order of Malta; and a member of the Women's Forum of Washington. She is a lifetime member of both the NAACP and the National Council of Negro Women, and a member of the LINKS, Inc, Metropolitan D.C. Chapter.

Roane has received many awards and honors for her work. She has won multiple Emmy and Gracie Awards. She was also named one of Washingtonian Magazine's "Washingtonians of the Year" in 2006, and was honored by the Sibley Memorial Hospital Foundation with its Community Service Award. In addition to being named the 2010 Rebecca Lipkin Honoree for Media Distinction by Susan G. Komen For the Cure, she received the 2012 Faith Does Justice Award from Catholic Charities.

Roane and her husband, Michael Skehan, live in Washington, D.C. They have two children: Alicia and Andrew.

Andrea Roane was interviewed by The HistoryMakers on January 27, 2014.

See how Andrea Roane is related to other HistoryMakers
Donate Now
Click Here To Explore The Archive Today!